Morgan Le Fay was a malign fairy or sorceress who appeared in many guises throughout Arthurian legend. 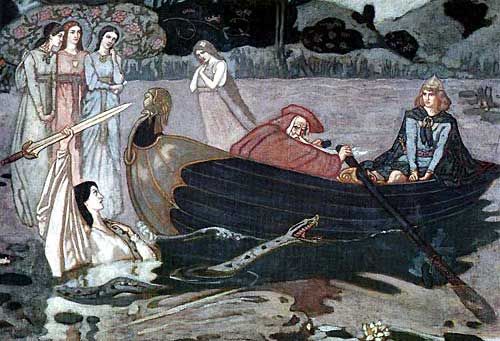 Morgane has often been compared with the goddess Modron, a figure derived from the continental Dea Matrona, featured with some frequency in medieval Welsh literature. Urien is Morgan le Fay’s husband in the continental romances, while Owain mab Urien is the historical figure behind their son Ywain. Urien had a loose ally: Morcant Bulc – a man – who eventually plotted to assassinate him, which could have been Sir Thomas Malory’s inspiration for the plot in Le Morte d’Arthur where Morgan Le Fay attempts to kill Arthur and Uriens. Additionally, Modron is called “daughter of Avallach,” a Welsh ancestor deity whose name can also be interpreted as a noun meaning “a place of apples”. Additional speculation sometimes connects Morgan with the Irish goddess Morrígan (a Triple Goddess of Celtic myth, thought of as the Goddess of Death), though there are few similarities between the two beyond the spelling of their names.

Daughter of Ygerna (Igraine) and Gorlois, Duke of Cornwall, half-sister to King Arthur(by Igraine and Uther Pendragon), wife of Uriens. She has at least two older sisters, Elaine and Morgause, the latter of whom is the mother of Gawain and the traitor Mordred.  In Sir Thomas Malory’s Le Morte d’Arthur and elsewhere, she is married, unhappily, to King Urien of Gore and Ywain is her son.

Morgan also gave her name to the mermaids of Brittany called Maries Morgan or Morganes and the mermaids of Wales called Morgen. The treachery of these aquatic females was so renowned that storytellers carried the fame of these demons as far as Italy, where mirages over the straights of Messina are to this day called Fata Morganas.

Endowed with supernatural skills in the art of herbal medicine, and occult magic powers, Morgan was one of the most powerful sorceress of her time. The t popular tales mentions the source of Morgan’s magic knowledge. She was the mistress of Merlin, and had been trained by the great magician in her youth.

Either beautiful or with a deformed face, Morgan can shapeshift into a variety of human and animal forms. If so, her beauty could be only a charm. In the legend of Sir Lancelot of the Lake, Morgan appears as a vicious hag, but in the story of Sir Gawain and the Green Knight, she was an imposing crone and remained in the background until she was revealed as ‘Morgan the goddess’.  In Ireland she assumed the shape of a wolf-bitch or a heifer, crowned with a silver crescent instead of horns. If she was insulted in any manner, she took on the form of a crow that swooped down and stole children.

Morgan is the ruler of an underwater paradise, the island Avalon but inhabited at times other places besides Avalon. Her chief fortress was Mongibel in England, and she was the mistress of a castle full of beautiful but wicked fairy servants near Edinburgh, called the castle of the Maidens. But her main home always remained Avalon, where she resided with her demon husband, Guingamar.