Morgan Le Fay was first introduced into Arthurian legend by Geoffrey of Monmouth in the Vita Merlini, written about 1150. Purportedly an account of the wizard Merlin’s later adventures, it elaborates some episodes from Geoffrey’s more famous earlier work, Historia Regum Britanniae. In the Historia, Geoffrey explains that after Arthur is seriously wounded at the Battle of Camlann, he is taken off to Avalon, the Isle of Apples, to be healed. Morgen was the chief among her nine sisters: Moronoe, Mazoe, Gliten, Glitonea, Cliton, Tyronoe, and Thitis, and Morgause. She could change shape at will (and to be young or old, beautiful or ugly, or an animal or other object). Morgan retains this role as Arthur’s otherworldly healer in much later literature. 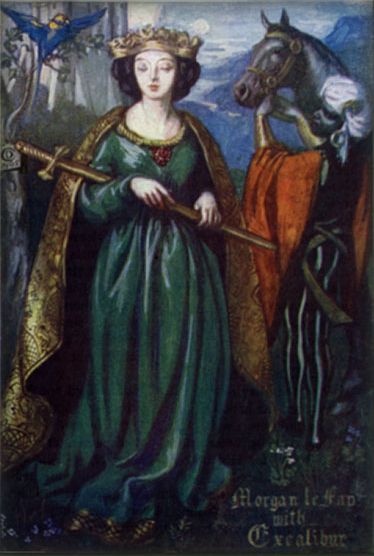 In Chrétien de Troyes’ Erec and Enide, completed around 1170, Morgan le Fay was a friend of Guingamar, Lord of Avalon and one of the guests at the wedding of Erec and Enide. Chrétien describes her as a giver of healing ointments but she is more typically portrayed as a wicked enchantress who learned her crafts in a Christian nunnery, powers which were subsequently extended with the help of Merlin. She was referred to later as Arthur’s sister (and again as a healer), and in his later romance Yvain, the Knight of the Lion, her ointments cured Yvain’s madness. Neither Geoffrey of Monmouth nor Chrétien de Troyes described her as the wife of Uriens.

Morgan’s role is greatly expanded in the 13th-century Lancelot-Grail (Vulgate Cycle) and the subsequent works inspired by it. The youngest of Gorlois and Igraine’s daughters, she is sent to a convent when Uther Pendragon kills her father and marries her mother. There she begins her study of magic, but is interrupted when Uther betroths her to his ally Urien. Unhappy with her husband, she takes a string of lovers until she is caught by a young Guinevere, who expels her from court in disgust. Morgan continues her magical studies under Merlin, all the while plotting against Guinevere.

In subsequent chapters she uses her skills to foil Arthur’s knights, especially Lancelot, whom she alternately tries to seduce and to expose as Guinevere’s adulterous lover. In the Prose Tristan, she delivers to Arthur’s court a magic drinking horn from which no unfaithful lady can drink without spilling, hoping to reveal the infidelity. The suspect nature of Morgan Le Fay’s character appears to have been fuelled by the Cistercian monks who wrote the stories of the Vulgate Cycle, prejudiced by the earlier concept of the Morrighan. They undoubtedly considered the idea of a non-religious female healer to be the mark of blasphemy.

In another well-known work – the anonymous late 14th Century poem Sir Gawain and the Green Knight she is presented as the instigator of the Green Knight’s visit to Arthur’s court, partly motivated by her desire to frighten Guinevere. Her enmity towards Guinevere has its origin in the Vulgate Lancelot, where Morgan is having an affair with Guiomar, Guinevere’s cousin, and Guinevere puts an end to it. Despite the motif of Morgan’s enmity towards Arthur and Guinevere, she is also presented as one of the women who takes Arthur in a barge to Avalon to be healed.

Thomas Malory mostly follows the portrayal of Morgan in the Vulgate and Post-Vulgate Cycles in his book Le Morte d’Arthur Morgan Le Fay, though he expands her role in some cases.

When Uther Pendragon married Igraine (Book 1), Morgan was the youngest of her three daughters from her previous marriage to Gorlois, Duke of Cornwall, who had been slain by Uther’s army just before he raped her at Tintagel Castle (and begat Arthur). Morgan was then sent to a nunnery. According to Malory’s timescale, at the time of Uther’s death two years later, Morgan would have been between thirteen and sixteen and already married to Uriens. At any rate, when the young King Arthur waged war against the five kings Morgan had a grown son, Uwaine, who was close to knighthood.

King Arthur and Morgan Le Fay first came face to face when he sent for Igraine to verify his parentage. At that stage there are no indications of any feelings either way between Morgan and Arthur, but at the burial of Lot and the eleven kings (Book 2) Merlin told Arthur, “Sir, take care with the scabbard of Excalibur, for ye shall lose no blood while ye have it upon you, no matter how many wounds ye have.” Arthur passed the scabbard to Morgan Le Fay for safekeeping, but she loved another knight more than she did her husband (or King Arthur) so she secretly had made a replica of the scabbard and gave the real one to her lover, Sir Accolon of Gaul to protect him.

Following the war with the five kings, Arthur, Uriens, and Accolon went on a hunt (Book 4). Their horses exhausted, they found themselves near nightfall by a great lake where they saw a silk-clad ship approach. Venturing on board, they were greeted by twelve damosels, banqueted, then shown separate chambers. Once in a drug-induced sleep, each was magically transported away, Uriens back to Camelot (where he awoke beside Morgan), Arthur to the prison of the evil Sir Damas (minus his sword and scabbard), and Accolon to a well close to manor of the good Ontzlake, younger brother of Sir Damas.

Despite being brothers, Sir Damas and Sir Ontzlake had become mortal enemies, the younger offering to resolve their differences in combat but the latter always refusing, preferring to elect another knight to fight for him. But Damas was too hated ever to find such a knight. At this point a damsel came to Arthur with an offer from Damas that he and his fellow-prisoners would be freed if he would take on the fight, to which Arthur agreed. The damsel was of course ‘false’, having been sent by Morgan Le Fay.

At the same time a dwarf came to Sir Accolon by the well, sent by Morgan to remind him of his earlier (secret) promise to fight an unspecified knight whenever she chose the moment. Accolon would bring her the knight’s head and Morgan Le Fay would become Queen. And now was the moment. The dwarf gave him Excalibur and the scabbard, sent by Morgan, and Accolon made himself ready for combat, on behalf, as it turned out, of Sir Ontzlake against his brother. As Arthur in turn readied himself another damsel came, once again sent by Morgan, and gave him a sword like Excalibur and its scabbard, from which he took reassurance not knowing they were nothing more than poor replicas. The whole monstrous ruse, evidently, had long been planned by Morgan Le Fay so that she could replace Guinevere as Queen.

The duel, watched by Nimue, the Lady of the lake, was prolonged and bloody and Sir Accolon, boldened by Excalibur, almost won after Arthur’s useless sword snapped off at the handle. Nimue took pity and with the help of her enchantment Arthur was able to deal such a blow to his opponent that the real Excalibur fell to the ground and he leaped to it and took it in his hand. About to kill Accolon, he asked his name and Accolon confessed all, and thus was spared but died from his wounds soon after, prompting Arthur to despatch his remains to his half-sister at Camelot as a warning.

In the meantime Morgan would have slain her husband, confident of Accolon’s success with Excalibur and the scabbard, but Uriens was saved at the last moment by the intervention of Uwaine, his son, by whom Morgan would herself have been slain had she not agreed to leave Camelot forever. She rode to the nunnery where Arthur was recovering from his wounds and tried to steal back the real Excalibur and scabbard while he slept, but was only able to take the scabbard because the sword was in his hand. When Arthur awoke he set off with Sir Ontzlake in pursuit of Morgan, but she cast the scabbard into a deep lake. She then used her shape-changing powers to disguise herself and her entourage as standing stones to escape further pursuit.

Morgan Le Fay then retreated to her domains (still Book 4). En route she came across a knight leading another bound knight, Manassen (a cousin of Accolon) to be drowned in a fountain for adultery with his wife. For her lost love, and because Manassen swore his innocence, she released him and let him bind and drown his accuser.

At this point Morgan fades somewhat from the mainstream of the story. She went to occupy her lands in Gore, and then to her Castle of Tauroc. To thwart any reprisal by Arthur she sent a damosel to give him a rich mantle embellished with precious stones (in atonement for her sins). But the mantle was laced with poison – Nimue intervened to save Arthur, who made its bearer put it on, who fell down and burnt to coals. Uwaine was later suspected by Arthur of being instrumental in Morgan’s earlier escape from Camelot, and was banished from the court.

The Royal court appears to have thought Morgan Le Fay dead, until King Arthur came across her residence while out hunting one day, and the two were reconciled. In later life she moved to the Isle of Avalon, where she and her allies, the Queen of Northgalis, and the Queen of the Wastelands (and also many damosels, including Nimue) took her dying half-brother to be “healed” after his last battle at Camlann.

In Orlando furioso (The Frenzy of Orlando), an Italian romantic epic by Ludovico Ariosto published in 1532, Orlando, a great hero, went to rescue the many worthy men who had been imprisoned in Morgan’s castle. After overcoming many obstacles, such as dazzling beauty which blinded him temporarily, Orlando gained the silver key to the prison. Morgan warned him to be sure not to break the key in the lock or he would ‘involve himself and all, in inevitable destruction.’ This made Orlando ponder how ‘few amid the suitors who importune the dame, know how to turn the Keys of Fortuen.’

In the legends of Charlemagne she is most famous for her association with Ogier the Dane, whom she takes to her mystical island palace to be her lover for one hundred years.. In the chanson de geste of Huon de Bordeaux, Morgan is the mother of the fairy king Oberon by none other than Julius Caesar.

Morgan rarely appears in post-medieval works–until the twentieth century when there is a renewed interest in her character. Sometimes she is conflated with Morgause and made to be the mother of Mordred, as is the case in John Boorman’s movie Excalibur and a number of modern novels. In these works Mordred is often her pawn, used to bring about the end of the Arthurian age. In Mark Twain’s  A Connecticut Yankee in King Arthur’s Court Morgan le Fay is an archetypical corrupt and cruel feudal aristocrat, keeping prisoners for decades in her dungeon.

Morgan role changed in the 20th century when she was promoted to a more positive symbol of female power. Marion Zimmer Bradley gives her credit for the major events of the traditional Arthurian cycle in The Mists of Avalon.

One of the most interesting modern portrayals of Morgan appears in Thomas Berger’s Arthur Rex where, after a life devoted to evil, she decides to become a nun because of her belief that “corruption were sooner brought amongst humankind by the forces of virtue.” Morgan actually does become a defender of good in modern stories like Roger Zelazny’s The Last Defender of Camelot and Sanders Anne Laubenthal’s Excalibur