Mothra (Mosura) is a giant female butterfly-like kaiju who first appeared in the novel The Luminous Fairies and Mothra by Takehiko Fukunaga then in the movie Mothra (1961).

There are several combination of Mothra statistics because the first Mothra (1961) was created independently of the Godzilla series. Then, when Godzilla met Mothra for the first time in Godzila vs. Mothra (1964), Mothra was scaled down in size to match Godzilla, but remains the same creature.

The later Godzilla films (the Heisei series) made Mothra larger and more powerful because Godzilla, too, had increased in size and power. Like most insects, Mothra passes through a complete metamorphosis in her lifetime. Hatching from an enormous blue egg, Mothra first appears as a gargantuan and rather ugly caterpillar. Later, the larva encaes itself within a silken cocoon, from which ultimately emerges the multicolored winged adult stage.

Mothra’s origin is not well known. It was the guardian of an ancient race of tiny subteraneans named the Cosmos who lived on earth. The Cosmos civilization became very advanced but the Zen of Earth Lifeforce created Battra to kill Mothra and wipe out the Cosmos.

Although Mothra defeated Battra, the civilization of the Cosmos was defeated and Mothra lay dormant for many years. In 1992 it hatches from an egg when Godzilla and Battra threaten Japan. Worshipped as a benevolent god representing both love and renewal by the natives of Infant Island in the South Pacific, Mothra maintains a close telepathic contact with two tiny twin priestesses, the Shobijin (or Fairies).

Its behavior patterns and communication abilities indicate an above average level of intelligence. It is one of the most beautiful of all monsters with its fuzzy body and colorfully patterned wings. Mothra first appeared in Japan to recue her tiny, foot-tall twin priestesses, who had been kidnapped by an unscrupulous promoter (Mothra, 1961).

Later, in Mothra vs. Godzilla (1964), humanity appealed to Mothra for help against Godzilla’s aggression. In Godzilla Final Wars, Mothra once protected the world in ancient times from the space monster Gigan. After being summoned by her Shobijin to help the Earth in a 21st century assault, Mothra flew over Tokyo to aid Godzilla in a battle against Monster X.

The Xilien wouldn’t let that happen, though, and they sent an improved Gigan to stop Mothra. Mothra is quickly dispatched by Gigan. Mothra quickly recovers and attacks Gigan and Monster X. Gigan resumes his battle with Mothra, using its laser vision beam, turning Mothra to a wall of fire. As a final effort, a burning Mothra flies towards Gigan, and both kaiju are destroyed in a kamakaze attack by the lepidopteran deity. Mothra does survive and returns to Infant Island at the ending credits. 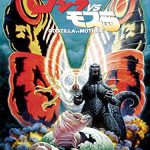