Necromancy ( from Greek ‘nekrós, ‘dead body’ and ‘manteía’, ‘divination’) is the art of summoning departed spirits for divination, prophecy, or magical purposes.

Necromancy holds a place of honor among ancient oracular arts. Shamanic practitioners have always received training in communication with the dead. The latter were thought to be skillful at diagnosing illness and prescribing cures.

Necromancy was well developed among the Egyptians, Assyro-Babylonians, and Etruscans of the ancient world. Citizens in classical times revered their necromaneia, oracles of the dead, and often made pilgrimages to them. A famous oracle of this type was located at Epiris in a hillside cave.

The legendary hero Odysseus summoned the dead at Epiris and obtained valuable guidance for his perilous journey home. This site was associated with the worship of Persephone, goddess of the underworld, and later with Hades, god of the dead.

During the medieval and renaissance periods of European history, summoning the dead was practiced as a normal part of life. Wise-women and wise-men in the countryside conjured up departed spirits to help diagnose illnesses and prescribe cures. Families prayed to departed relatives for guidance, asking them to appear in dreams or make their presence known.

Souls who had “crossed over to the other side” were particularly helpful in finding missing persons or lost treasure. They also felt impelled, like the ghost of Hamlet’s father, to expose secret crimes that had been committed. Catholic priests practiced their share of necromancy in centuries past, a matter rarely discussed in church history books!

The English occultist Francis Barrett, author of The Magus (1801), said that necromancy:

has its name because it works on the bodies of the dead, and gives answers by the ghosts and apparitions of the dead, and subterraneous spirits, alluring them into the carcasses of the dead by certain hellish charms, infernal invocations, deadly sacrifices, and wicked oblations.

In this nineteenth-century illustration, Edward Kelly (1527-1608), famous mathematician, philosopher, and astrologer for Queen Elizabeth, holds a torch while an adept necromancer consults with a spirit. They are protected by a magic circle etched with signs of the zodiac and other arcane symbols. A frightful looking corpse rises from its tomb to impart unthinkable secrets.

Necromancy plays a role central role in the Faust legend, for example. In Dicken’s Christmas Carol, Scrooge’s life is saved by his nocturnal conversations with a departed soul.

Medieval necromancy was a synthesis of astral magic derived from Arabic influences and exorcism derived from Christian and Jewish teachings. Arabic influences are evident in rituals that involve moon phases, sun placement, day and time. Fumigation and the act of burying images are also found in both astral magic and necromancy. Christian and Jewish influences appear in the symbols and in the conjuration formulas used in summoning rituals.

In necromancy for the reanimation of a corpse itself, the corpse must be propped upright on its feet to symbolize its return to life. Herbs are placed on the chest and head to magically restart breathing. The corpse may also be anointed with the necromancer’s own blood. The necromancer utters incantations to command the dead person to reenter its corpse. If the ghost fails to respond, the necromancer threatens it with tortures in the underworld.

Circles were usually traced on the ground, though cloth and parchment were sometimes used. Various objects, shapes, symbols, and letters may be drawn or placed within that represent a mixture of Christian and occult ideas. Circles were usually believed to empower and protect what was contained within, including protecting the necromancer from the conjured demons. A text known as the Heptameron explain the function of the circle thusly: “But because the greatest power is attributed to the Circles; (For they are certain fortresses to defend the operators safe from the evil Spirits;)…”

Conjuration is the method of communicating with the demons to have them enter the physical world. It usually employs the power of special words and stances to call out the demons and often incorporated the use of Christian prayers or biblical verses. These conjurations may be repeated in succession or repeated to different directions until the summoning is complete.

Sacrifice was the payment for summoning; though it may involve the flesh of a human being or animal, it could sometimes be as simple as offering a certain object. Instructions for obtaining these items were usually specific. The time, location, and method of gathering items for sacrifice could also play an important role in the ritual.

A Greco-Egyptian spell for making a ghost familiar calls for taking an ass’s skin that has been dried in the shade and inscribing on it a magical symbol within a circle: a human figure with a lion’s head that breathes fire, wearing a belt, holding a snake-entwined staff in the right hand, and having an asp wound around the left arm. A magical spell is written on the skin. The necromancer utters an incantation commanding the dead to appear and indicate willingness to obey. The necromancer then goes to a burial place and spreads the hide at sunset. The ghost will appear in a DREAM, describe its death, and indicate whether or not it will be of service.

The necromancer takes a flax leaf and draws upon it a figure of the goddess of the moon and underworld, Hecate, who has three heads—an ox, dog, and maiden—and six hands that hold torches. Also inscribed is an incantation that commands the ghost to obey on fear of painful punishment. The necromancer takes a papyrus, draws upon it the figure of Osiris, and writes an incantation commanding obedience. The papyrus is presented to the ghost. Once under submission, the familiar can be sent to give others nightmares, make them sick, and attract them to the necromancer.

The story of Saul and the witch of Endor

King Saul was more unpopular than ever and now David seems to be against him. The man who so viciously persecuted the oracular arts had to turn to them for help in his hour of need. In desperation, the king disguised himself and traveled to see a witch who lived in Endor. She was reputed to communicate with spirits of the dead and gain access to hidden knowledge for those who sought her help. Saul knocked on her door. “I pray thee,” he said. “Bring up a certain soul of the dead, for I am in great need.”

The woman recoiled in alarm. “You know that the king has persecuted all seers, wizards, and those with familiar spirits,” she cried. “Are you laying a trap for me so I will lose my life?” Saul promised that he was laying no trap and that no harm would come to her if she assisted him. So she reluctantly invited him inside.

After going into a trance, the seeress beheld a vision. “I see gods ascending out of the earth,” she exclaimed. “And they gather into the form of a man covered in a long mantle.” Then Saul bowed low to the ground, for he recognized the spirit of his wise deceased counselor, the prophet Samuel.

But harsh words issued from Samuel’s mouth. “Your attacks on David are evil,” Samuel charged. “You have violated your covenant with the Lord. Tomorrow you will die.” Hearing this news, Saul collapsed in a heap.

The next day, Saul’s troops were slaughtered and he himself mortally wounded. Knowing he would soon die, the king fell upon his own sword. Based on I Samuel, Chapters 28 and 31 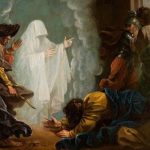 The Witch Of Endor