This is one of the earliest books which throws light on the methods of persecution. Written by the Dominican scholar Johannes Nider, about 1436, the work consists of a dialogue between a theologian and a doubter on a variety of topics.

I will relate to you some examples, which I have gained in part from the teachers of our faculty, in part from the experience of a certain upright secular judge, worthy of all faith, who from the torture and confession of witches and from his experiences in public and private has learned many things of this sort-a man with whom I have often discussed this subject broadly and deeply-to wit, Peter, a citizen of Bern, in the diocese of Lausanne, [Note: this is Peter of Gruyeres, Bernese castellan 1392-1406] who has burned many witches of both sexes, and has driven others out of the territory of the Bernese. I have moreover conferred with one Benedict, a monk of the Benedictine order, who, although now a very devout cleric in a reformed monastery at Vienna, was a decade ago, while still in the world, a necromancer, juggler, buffoon, and strolling player, well-known as an expert among the secular nobility. I have likewise heard certain of the following things from the Inquisitor of Heretical Pravity [note: this was the official title of the represenative of the Inquistion] at Autun, who was a devoted reformer of our order in the convent at Lyons, and has convicted many of witchcraft in the diocese of Autun.

The same procedure was more clearly described by another young man, arrested and burned as a witch, although as I believe, truly, penitent, who had earlier, together with his wife, a witch invincible to persuasion, escaped the clutches of the aforesaid judge, Peter. The aforesaid youth, being again indicted at Bern, with his wife, and placed in a different prison from hers, declared: “If I can obtain absolution for my sins, I will freely lay bare all I know about witchcraft, for I see that I have death to expect.” And when he had been assured by the scholars that, if he should truly repent, he would certainly be able to gain absolution for his sins, then he gladly offered himself to death, and disclosed the methods of the primeval infection.

The ceremony, he said, of my seduction was as follows: First, on a Sunday, before the holy water is consecrated, the future disciple with his masters must go into the church, and there in their presence must renounce Christ and his faith, baptism, and the church universal. Then he must do homage to the magisterulus, that is, to the little master (for so, and not otherwise, they call the Devil). Afterward he drinks from the aforesaid flask: and, this done, he forthwith feels himself to conceive and hold within himself an image of our art and the chief rites of this sect. After this fashion was I seduced; and my wife also, whom I believe of so great pertinacity that she will endure the flames rather than confess the least whit of the truth; but, alas, we are both guilty. What the young man had said was found in all respects the truth. For, after confession, the young man was seen to die in great contrition. His wife, however, though convicted by the testimony of witnesses, would not confess the truth even under the torture or in death; but when the fire was prepared for her by the executioner, uttered in most evil words a curse upon him, and so was burned. 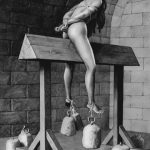