Revenge from the past

Visions of the walking dead as instruments of ghostly vengeance date from ancient times. Also known as corporeal ghost, they are not really zombie as they usually display a strong personality and remembrance of the past.

Their vengeance is usually restricted to those who have violated their sleep or caused their unfair death. The influence of Romero’s living dead lies mainly in the type of violence they commit.

These days the general audience of these films expects zombies that mutilate their victims horribly and their vengeance is more likely to have a degree of cruelty which was not present in early days.

The Crow (1994), half shapeshifter, half zombie, comes back from the grave to revenge on those who killed him and his fiancée.

Similarly, in one of the stories of Tales from the Crypt (1972), Cushing plays an eccentric old man who is cruelly driven to his death by a malicious neighbour. He returns in a state of decay, face gaunt and wrinkled, clothes covered in grave-dirt, to express his displeasure in a direct show of violence that is, ripping out his tormentor’s heart.

In Creepshow (1985), another homage to horror comics, revenge becomes even gorier as an angry father, dead, returns in an advanced state of decomposition and ironically creates a designer birthday cake out of his daughter’s head.

Another variation puts on stage various evil groups or individuals from the past returns to create havoc in the present, such as Ossorio’s Knights Templar or Nazi zombies (The Frozen Dead, Lake of the Living Dead, The Treasure of the Living Dead, Shock Waves). These zombies embody the power of evil that continue to haunt generations to follow, a symbol for psychological trauma.

Another theme which frequently appears in zombie movies is the hell brought on by government scientific experimentation on chemical or genetic alteration of the human physiology.

The idea of the military plotting and creating havoc is a widely used concept in many conspiration films and find a perfect vehicle with these types of zombie movies. In Toxic Zombies (1980), a secret government agency uses an experimental herbicide on a marijuana plantation, and those trying to harvest the illegal crop. The resulting zombie-like creatures take a general revenge on anyone in the vicinity.

The film 28 Days Later, on the other hand, depicts the outbreak of an engineered “rage virus” which transforms its victims into a zombie-like state; however, they maintain higher cerebral function. They exhibit pack and hunting behavior and move too fluidly to be classified as true zombies. The zombies in 28 Days Later also do not appear to exhibit the enhanced resistance to normal injury, like most zombies in popular culture do.

Sometimes the zombie germ comes from outer space. In Night of the Comet (1984), a rare astral passing converts the survival fighters into violent zombies. Also originating from outer space is the menace of The Night of the Creeps (1986). Zombification takes place when alien slug-like creatures kills the victims but habit the corpse that keep walking around, trying to infest others.

Lifeforce (1985) has some visiting, energy-draining aliens causing those they have killed to return to life filled with a desire to inflict similar injury on other humans. The apocalyptic climax, depicting London overrun by zombies intent on sending the life-energy of the populace to the alien mother ship and its load of comatose aliens, is an effective piece of gaudy and oddball SF histrionics.

Mario Bava’s SF thriller, Planet of the Vampires (1965) display similar aliens that turn earthlings into zombies. Another popular theme in zombie films is the presence of some evil force or black magic that releases the zombies on the living.

Another popular theme in zombie films is the presence of some evil force or black magic that releases the zombies on the living.

In Lambert Bava’s Demons (1986), the source of the infection is demonic possession The audience at a late-night horror film preview find that demonic images on the screen are being replicated in reality as victims are turned into killing zombies, who then infect others.

The Evil Dead (1982) and The Evil Dead II (1987) are based on the concept of evil possessing the living and turning them into zombies. Sometimes it is the devil himself who creates the living dead.

The best explanatory sentence is probably to be found in Dawn of the Dead :

“When there’s no more room in hell, the dead shall walk the earth.”

In Night of the Living Dead radiation from a space probe may cause the epidemic. All the recently deceased return to life. There is no need for this to ‘spread’, it is simply universal. As our brainwaves can be measured in hertz, and parts of the human body are reactive to different frequencies of radiation, it stands to reason that some radiation can effect our brains in specific ways, perhaps some primitive part of the brain that is overridden by the cortex.This primitive behaviour involves the person trying to eat, or kill, the living.

An experiment to create Nanobots to repair neural pathways that were destroyed due to disease or nerve damage goes awry turning the patients into ravenous, adrenaline charged cannibals.

Even when the host is dead, the nanobots continue to operate, keeping the body animate long after all of the major organs have failed. The only way to stop the zombie is to destroy the central cluster of nanobots located in the brain. 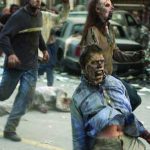 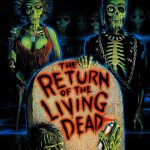