Description:  a serpent whose end is his beginning as he endlessly eats his own tail.

Origin: The Serpent biting its own tail is first seen as early as 1600 years BC in Egypt. From there it moved to the Phonecians and then to the Greeks, who called it the Ouroboros, which means devouring its tail

Famous: The serpent biting its tail is found in other mythologies as well. In Norse mythology Jörmungandr circles the entire world whith his huge body. In Hindu mythology, the snake circles the tortoise which supports the four elephants that carry the world.

Symbol: the serpent biting, devouring, eating its own tail symbolises the cyclic Nature of the Universe: creation out of destruction, Life out of Death. The ouroboros eats its own tail to sustain its life, in an eternal cycle of renewal. It is also an emblem of immortality. Its endless representation with its tail in its mouth (Ouroboros), and the constant renewal of its skin and vigor, enliven the symbols of continued youth and eternity.

Alchemically, the ouroboros is also used as a purifying glyph. It keeps the cosmic waters under control, and is symbolic of the cyclical nature of alchemical work. It is the basilisk, the alchemical serpent. 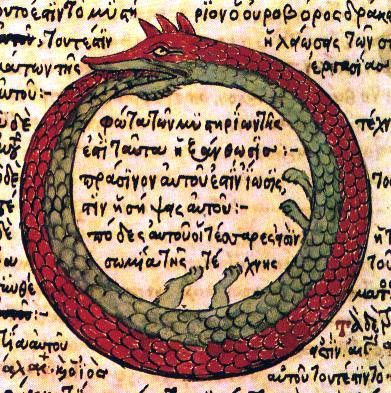