The penanggalan in Malay lore is a woman whose head, esophagus,stomach, and intestines separate as a whole from the rest of her body at night to fly off and seek human prey whose blood she drinks.

Her favorite victims are children and women in labor. One way to protect a home against her is to place thorny branches on the roof. Her dangling intestines tend to get caught in the thorns.

The intestines of a  penanggalan are so bloated with blood when she returns to her own home before dawn that they can’t cannot fit back into the part of her body that she left behind.

She needs to shrink them by soaking them in a jar of vinegar. One way to destroy a penanggalan is to make a hole in the jar so that the vinegar will all have leaked out by the time she needs it.

More about the penanggalan on Monstropedia, the reference encyclopedia about monsters. 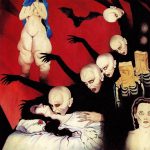