People directly exposed to radiation by the atomic-bomb detonations in Japan during the Second World War and by nuclear accidents such as Chernobyl, suffer increased rates of cancer. But the common perception that exposed individuals bear children with deformities is not yet backed up by scientific study. Measuring the mutation rate caused by radiation has proved difficult as any given gene will be affected rarely, so only a large population would reveal an accurate frequency – and no such human population exists. Thus, any effects of inherited mutations are likely to be small and difficult to detect against the normal incidence rates of cancer and disease.

Nevertheless, recent studies conducted in Russia reveal that people who were exposed to fallout from nuclear-weapon tests have more genetic mutations in their eggs and sperm than normal, researchers have found. Their children could inherit health defects caused by such mutations.

People who lived near a nuclear test site in the former Soviet Union during active above-ground and atmospheric testing have nearly twice as many inheritable DNA mutations as their countrymen and women who were not exposed to radiation, according to the results of a new study by Dr. Yuri E. Dubrova of the University of Leicester, UK.

Between 1949 and 1989, 470 nuclear tests were performed at the Semipalatinsk nuclear test site, some of which resulted in relatively high contamination of surrounding territories with radioactive fallout. The study “provides us with the first solid experimental evidence of an elevated mutation rate in the germline of families exposed to ionizing radiation,” Dubrova said.

Germline refers to the genes contained in a man’s sperm and a woman’s eggs, which are passed on to their children. The researchers found double the normal rate of genetic changes in people’s sperm and eggs. These cells form future offspring, so the mutations are likely to be hereditary.

In the Semipalatinsk population, the team found that the more years people were exposed to the radiation, the greater their mutation rate.

Even by the late sixties most science fiction writers had rejected the mutant superpowers theme as absurd; but it was replaced with the ever-popular mutant monster, which already by the seventies had become a cliché.

The nuclear cautionary film series Planet of the Apes has started a series of movies inspired from the theme of nuclear mutation. 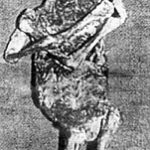