The forms and habits of ghosts may be incredibly varied, but their reason for returning, the basic purposes behind their presence among us, tend according to folklore to be fairly limited.

Many of the reasons for ghosts suggested by past and primitive societies can still be found in modern legend and urban myths.

Return for a purpose

The appearance of a ghost has often been regarded as an omen or portent of death. Seeing one’s own ghostly double or “fetch” is a related omen of death.

White ladies were reported to appear in many rural areas, and supposed to have died tragically or suffered trauma in life. White Lady legends are found around the world. Common to many of them is the theme of losing or being betrayed by a husband or fiancé. They are often associated with an individual family line, as a harbinger of death. When one of these ghosts is seen it indicates that someone in the family is going to die, similar to a banshee. 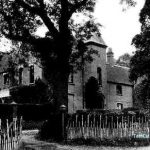