Godzilla’s roar is a famous sound effect. Over the years, it has changed considerably, sounding different almost every time and having many variations for the different emotions.

The sound effects team originally tried to create Godzilla’s roar by using animal roars that had been edited. They sampled all kinds of birds and mammals, but nothing seemed to be the right match for the reptile-like noises a monster like Godzilla would make.

Akira Ifukube, who was the film’s composer, proposed stepping away from using animal samples. He took a string off of his contrabass and rubbed it with gloves soaked in pine tar. The sound that came from it was used as Godzilla’s roar. This roar would later be altered for use as the roar of other monsters in the Showa Era, including Varan, Baragon and Gorosaurus.

The latest version of the roar measures 174 decibels. The final version of Godzilla’s roar is overlaid with the roars from both the 1954 film and the roars used from 1962 to 1975.

Godzilla’s roar can be written in readable characters and has been done so in comics, and not only by a simple “roar.” In Japanese, the official onomatopoeia for Godzilla’s roar is “Gyaoon” (ギャオーン Gyaōn)–additional “o”s can be added to extend the roar. 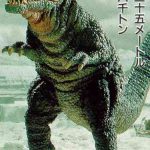 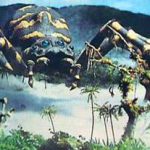