The Patterson-Gimlin film (also referred to as simply the Patterson film) is a short motion picture of an unidentified subject filmed on October 20, 1967 by Roger Patterson (Wall, South Dakota, February 14, 1926 – January 15, 1972) and Robert Gimlin (Missouri, October 18, 1931) who claimed the film was a genuine recording of a bigfoot. The film has been subjected to many attempts both to debunk and authenticate it.

Both men have always dismissed allegations that they had hoaxed the footage by filming a man wearing an ape suit; in fact, Patterson, who died of cancer in 1972, swore on his death bed that the footage was authentic and he had encountered and filmed a large bipedal animal unknown to science. Patterson’s friend and business associate, Gimlin, has always denied being involved in any part of a possible hoax with Patterson and claims that he and his partner had encountered a real bigfoot.

Capturing the fleeting sight of a seven-foot apelike creature retreating into the Northern California wilderness, the controversial Patterson Bigfoot film is among the most renowned artefacts in the field of paranormal study. The footage has achieved iconic status even among the public at large, and forms the foundation of many Bigfoot hunters’ beliefs.

Roger Patterson, a former rodeo rider had become deeply fascinated with Bigfoot after reading press reports about the creature in 1957. He and his friend Bob Gimlin had gone into different wilderness areas in Washington many times to search for the creature. Often, they would be following-up reports of sightings or footprints. Highly influenced by the writings of Dr. Ivan T. Sanderson, Patterson compiled his own book entitled Do Abominable Snowmen of America Really Exist? He published this book in 1966. At some point early in the following year, Patterson decided to make a film documentary on Bigfoot.

During late August and early September 1967, Patterson and Gimlin were exploring the Mt. St. Helen’s area. While they were away, Al Hodgson and Syl McCoy, friends in Willow Creek, California, phoned Patterson’s home to report footprints found in the Bluff Creek area. Patrica Patterson, Roger’s wife, took the message and gave it to her husband when he returned. The tracks, which were said to be of three different sizes, had been found on new logging roads being built in the Bluff Creek region. This same area was the scene of considerable Bigfoot activity nine years earlier. It was here in 1958 that Jerry Crew found large human-like footprints. A subsequent press release on Crew’s find made the word “Bigfoot” the American name for the creature.

As soon as he got the news, Patterson contacted Gimlin and the two men made plans to investigate Bluff Creek. They wished to find and film fresh footprints as evidence of the creature’s existence in and around Willow Creek, a frontier town that sits near the Oregon border, right in the center of the Klamath and Six Rivers National Forests. Patterson subsequently rented a 16mm movie camera and purchased two 100-foot rolls of color movie film for the expedition. Patterson and Gimlin traveled to the Bluff Creek area in a truck, taking with them three horses. By the time the men arrived at their destination, rain had all but destroyed the tracks. After setting up camp near Bluff Creek itself, the men set out on horseback to explore the area. Patterson was intrigued with the scenery and autumn colors. He used 76-feet of the first film roll for general filming and shots of both himself and Gimlin.

According to Patterson’s account, for seven days they saw nothing. All that changed on October 20. On that day he and Gimlin were riding on horseback in the wilds of California’s Bluff Creek valley, due north of Willow Creek, when they were thrown off their horses. Sensing a movement on the other side of the river, they pointed their camera in that direction. The creature rose to a full height that Patterson estimated at seven feet, four inches, and began walking toward the woods. Patterson took 24-feet of color film footage which expired the film roll in the camera. During this time, the creature crossed the creek and walked along the opposite sandbar heading upstream. At one point, the creature turned and looked towards Patterson. The creature then hastened its pace somewhat as it continued its passage into a sparsely wooded area directly ahead. The footage taken by Patterson shows the creature as it disappeared and reappeared between trees in the distance.

The two men followed the creature during more than 30’ until they loose the tracks in the mountains. In that part of Bluff Creek, there is a sandy clay soil with a blue-gray tinge. This type of soil holds footprints remarkably well for a long period of time. The footprints measured 14.5-inches long by 6-inches wide. Patterson also took movie footage of this experiment and made plaster casts of the creature’s prints. The following days, heavy showers removed any opportunity to come closer to Bigfoot.

When Patterson returned to town, he contacted Al Hodgson, a fellow Bigfoot-hunter and expert. Then he went public with his findings, setting off a firestorm of controversy and piquing the interest of everyone from National Geographic to National Enquirer.

In the ensuing three decades, the 952 frames of Patterson’s Bigfoot film have been submitted to all manner of examination and analysis. The creature has been classified as female, because of its apparent breasts. Theorists have extrapolated descriptions of everything from its psychological bearing to its eating habits on the basis of its behavior in the film. Minutiae of the creature’s physiognomy, such as the exact way in which it moves its neck, and its unusual method of distributing its weight as it strided, have led many to conclude that this could not be a man in a suit.

Patterson and Gimlin’s Bigfoot sighting experience at Bluff Creek was highly unique for three main reasons. First, there were two witnesses to the event, so their stories could be crosschecked. Second, there was photographic evidence in the form of the movie Patterson took which could be analyzed. Third, the men had plaster casts of the footprints made by the creature to further confirm the sighting. Moreover, many of the footprints at the film site remained intact and could be seen, photographed and cast by other researchers.

Many scientists dissected the footage. Some claim the film was indeed that of an unknown animal. The estimated stride of the creature is larger than that of a man and would have been very difficult for a man to simulate. Great weight was also indicated by how the creature’s arms swung and how its knees bent when its body weight came onto its feet. They stated that bulk could be simulated, but not massive weight. Others claim it was merely a man in an obvious monkey suit.  If the creature was a fake, everyone agrees that it was a remarkably skillful one. Patterson earned a tidy profit as he licensed the footage worldwide but died in 1972. His friend, Bob Gimlin, who didn’t make a nickel, maintains the film is genuine

A rumor has circulated that John Chambers manufactured the suit allegedly worn by the ostensible Bigfoot pictured in the famed Patterson Film. John Chambers, a legendary elder statesman in the field of monster making, is best known as the makeup mastermind behind the Planet of the Apes films. His innovative and highly articulated ape masks won him an Academy Award in 1968. Chambers created monster costumes for dozens of other movies and TV shows, including The Outer Limits and Lost in Space. The Patterson film was shot in 1967, in the same timeframe that Chambers was working on Planet of the Apes. Chambers created monster suits for Lost in Space in 1965 and 1966, which look very similar to the creature in the Patterson film, only with a different head. Chambers may have recycled them to fabricate the Patterson Bigfoot. According to some “experts”, the Patterson Bigfoot shows evidence of having a water bag under the fur in the stomach area, a trick used to make a gorilla suit move like real flesh. Charlie Gemora, with whom Chambers had worked at Paramount, developed this liquid stomach technique.

In March of 1992, Bob Gimlin admitted that he might have been fooled. He gave thought to the possibility that Roger concocted the whole thing and Bob was an unknowing eyewitness to one of the most elaborate hoaxes in the world.

Chambers, who currently resides in a Los Angeles nursing home in frail health, has recently told interviewers that he had nothing to do with the Bigfoot seen in Patterson’s film. In an interview of February 1997 by Bobbie Short, a registered nurse and Bigfoot investigator, Chambers denied any involvement with the Patterson-Gimlin film. He also stated that in his opinion, neither he nor anyone else could have fabricated the creature seen in the film. Chambers went on to state that he was good, but not that good. Chambers admitted he was aware of rumors concerning his involvement in the film. He never took steps to set the record straight because it was good for business.

In October 1997, movie director John Landis said that Chambers had revealed this secret to him when they worked together on Beneath the Planet of the Apes in 1970. “That famous piece of film of Bigfoot walking in the woods that was touted as the real thing was just a suit made by John Chambers,” Landis said.

But the case is far from being closed just yet. A new study by the North American Science Institute has concluded that Patterson’s Bigfoot is genuine, and computer enhancement analysis suggests that the creature’s skin and musculature are that of a living animal, not a hairy suit. The debate of the film continues and will probably continue until the person who played the Bigfoot is finally found or someone produces a physical specimen for comparison.

The North American Science Institute (NASI) Report, Towards a Resolution of the Bigfoot Phenomenon, prepared by Mr. Jeff Glickman a forensic examiner, was released in June, 1998. The main report findings applicable to the Patterson/Gimlin may be summarized as follows:

Mr. Glickman closes his scientific findings with the following statement: “Despite three years of rigorous examination by the author, the Patterson-Gimlin film cannot be demonstrated to be a forgery at this time.” 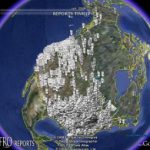