Witches and wizards knew it was the time because their secret mark (made by the devil) itched them. Then, they had to prepare for the Sabbath.

Some went there simply by walk, but it was generally admitted that witches flied either on animals companions or demons or on their own broomstick after having rubbed their body with the Flying Ointment.

Once the witches have reached the place of the Sabbaths, sometime along with new initiates,  the Devil appeared, usually in the form of a black goat (He-goat) but it can also take the shape of a black cat, a raven, a crow, or a feathered toad.

The attendants kissed his buttocks in greeting. Then they informed him of all the harmful spells they had done since the last Sabbath and the names of their victims.

Then came the Queen of the Sabbath, a nude woman who rides a black sheep. Satan first urinates in a hole in the ground then all the audience do the same. Then they put the two fingers in the hole and make the sign of the cross reversed.

Satan comes back to the Altar and gives the Queen the sacraments from hell. After the fornication, he distributes the hellish ostie made on the nude body of the Queen.

The witches had then to pay homage to the Devil, renew pacts, write their names in the Black Book, and have the initiate take an oath. The baptism ceremony for the initiate consumption sometimes involved menstrual blood. The devil put its mark on the initiate and had sex with him.

After these obligations wild dancing and sex followed, along with a feast often consisting either of delicious food or disgusting flesh like corpses of babies (salt is totally banned).

With the first lights of the day and before the cock sing, the devil vanished and the witches went back home. 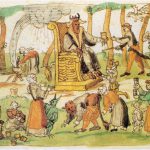 Secret Cult of the Devil