Schlitzie (alternatively spelled Schlitze or Shlitze; ( (1901 – (1971), possibly born Simon Metz and legally Schlitze Surtees, was an American sideshow performer. He suffered from microcephalus (his mental age was 3). His vast array of talents included singing, dancing and counting to ten.

On the sideshow circuit, microcephalic people were usually promoted as “pinheads” or “missing links”, and Schlitzie was billed under such titles as “The Last of the Aztecs”, “The Monkey Girl”, and “What Is It?”.

Schlitzie was often dressed in a muumuu and presented as either female or androgynous to add to the mystique of his unusual appearance. Those who knew him alternately used masculine and feminine pronouns. In some sideshows, he was paired with another microcephalic performer. His urinary incontinence, which obliged him to wear diapers.

The sideshow circuit was a tremendous success for Schlitzie; throughout the 1920s and 1930s he was employed by many upscale circuses, including Ringling Bros. and Barnum & Bailey Circus, Clyde Beatty Circus, Tom Mix Circus, Crafts 20 Big Shows and Foley & Burke Carnival.

Schlitzie landed his best-known role as an actor in Tod Browning’s 1932 horror film Freaks. Like The Sideshow, Freaks takes place at a carnival and features a number of genuine sideshow performers, including conjoined twins Daisy and Violet Hilton, “The Living Torso” Prince Randian, and dwarf siblings Harry and Daisy Earles. 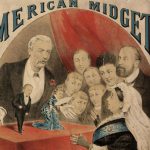