Reports of shadow people have existed throughout history. The observer generally reports seeing a dark shadow that resembles the form of a human which appears and moves of its own accord. Shadow people have been observed in daylight and many have observed them in full vision, although it is common to catch a sighting from the corner of the eye.
The figures does not have distinguishable facial features and may be either much smaller or larger than a human. They are often noticed as movement from the corner of the eye, sometimes disappearing when the observer turns to investigate.

Shadow people may move quickly across a room, usually disappearing through the wall or closed door. Many report a feeling of extreme dread or fear accompanying the sighting. Others have reported that when the shadow moves across their physical being a feeling of extreme cold overcomes their body. This sensation of coldness disappears once the apparition is gone.

Two common types of Shadow People are the ‘hat man’, that looks like he or she is wearing a 1930s fedora hat and the ‘hooded figure’, which looks like the shadow person has a hood over their head. 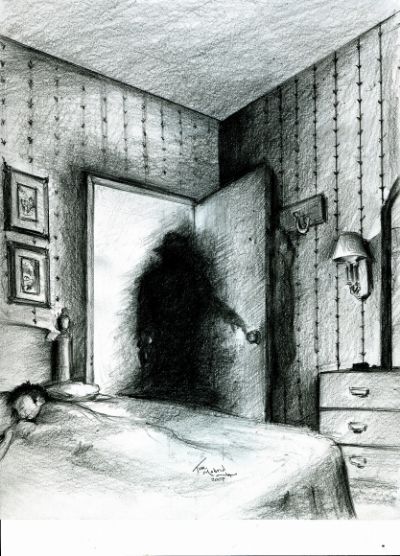 Location : seem to enjoy older and larger houses. Very sneaky and evasive, they tend to flee when in contact with humans.

Probability : 5/10  – Difficult to photograph but there has been some strange clichés. Easy to fake.

Other paranormal enthusiast believe that shadow people were never human at all and are a demonic spirit that embodies pure evil. Some have reported seeing glowing red eyes, but generally shadow people appear as a simple form that resembles the human form. Some report the presence of a hat or cape. One thing in common is that shadow people often try to avoid detection and like to observe from corners of the room, usually at night.

A state, known as hypnogogia, a physiological condition when a person is half way between sleeping and waking, could explain some sightings. During hypnogogia, the individual can be aware of the environment and at the same time be in a dream like state where they can receive images from the subconscious that they perceive to be real. In this waking-sleep state, similar to sleep paralysis, the individual often reports the sensation of dread that may be accompanied by shadows or flickering lights or other visual hallucinations. Hypnogogia could explain many instances of people reporting shadow people, but it does not explain the appearances observed by those who are wide awake or day time sightings.

Other skeptics attribute shadow people to nothing more than overactive imaginations and neurological disorders that trigger hallucinations or visual disturbances. This may be true in some cases, but does not explain images caught on film or shadow people who have been observed by more than one person.

How to deal with shadow people?

Shadow people do not appear to be dangerous, although they fill the observer will an overwhelming sense of fear and dread. The sense of pure evil may create a foreboding and uncomfortable atmosphere in the home. Many choose to seek the help of ghost hunters, psychics, and even the clergy. It may be helpful to invite paranormal investigators to your home to identify the haunting. For some, a psychic cleansing has taken care of the problem. Others have chosen to invite members of the clergy to perform an exorcism of the home. Still others choose to simply leave the shadow people alone and cohabitate in relative peace.