The first step is to determine whether or not you truly have a legitimate haunting or if the phenomenon is being caused mechanisms that can be explained by basic inquiry, or if it is being caused by environmentally or psychologically induced suggestions.

Remember, not all haunting occurrences are alike, each case may exhibit a variety of phenomena that is different from the last, some having a single feature that defines the events where others have occurrences  that range from strange sounds to full-blown spectral apparitions. Here is a list of some of the most common phenomenon that may indicate a true haunting.

This list in is no way all inclusive but it does give the reader an idea of what to look for in the event of a true haunting.

Rarer still are more extreme phenomena, some of which have been called poltergeist phenomena, and can be quite strong evidence of a true haunting:

A person who has experienced some of these phenomena might have cause to believe that his or her house is haunted. But maybe not. In fact, according to most experts, probably not. The human mind and human senses (as any magician will tell you) are easily fooled. And people can often mistake explainable (if unusual) occurrences in their homes for the paranormal. as real as some of these things might seem to you, they really could be just products of your imagination.

Before you decide there’s a ghost in your house or move out from fear, do your best to find rational explanations for what you are experiencing. Virtually all of the phenomena listed on the previous page could have perfectly natural causes:

Get help in finding rational explanations for the phenomena. A plumber might help you find the cause of that banging. A carpenter can fix that door from closing on its own. A friend or neighbor might be able to look at your particular experience in a different way and offer a reasonable explanation for your “haunting” that you might not have though of. In short, make every possible effort to prove that your house is not haunted. 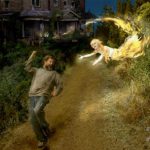 What to do if your house is haunted