Sleep paralysis is a condition in which someone, most often lying in a supine position, about to drop off to sleep, or just upon waking from sleep realizes that s/he is unable to move, or speak, or cry out. This may last a few seconds or several moments, occasionally longer. People frequently report feeling a “presence” that is often described as malevolent, threatening, or evil. An intense sense of dread and terror is very common.

The presence is likely to be vaguely felt or sensed just out of sight but thought to be watching or monitoring, often with intense interest, sometimes standing by, or sitting on, the bed. On some occasions the presence may attack, strangling and exerting crushing pressure on the chest. People also report auditory, visual, proprioceptive, and tactile hallucinations, as well as floating sensations and out-of-body experiences (Hufford, 1982). These various sensory experiences have been referred to collectively as hypnagogic and hypnopompic experiences (HHEs).

People frequently try, unsuccessfully, to cry out. After seconds or minutes one feels suddenly released from the paralysis, but may be left with a lingering anxiety. Extreme effort to move may even produce phantom movements in which there is proprioceptive feedback of movement that conflicts with visual disconfirmation of any movement of the limb. People may also report severe pain in the limbs when trying to move them.

Several recent surveys suggest that between 25-30% of the population reports that they have experienced at least a mild form of sleep paralysis at least once and about 20-30% of these have had the experience on several occasions.

Sleep paralysis related experiences appear to range from what might be best termed fleeting illusions to true hallucinations and range from vaguely disturbing to extremely terrifying.

These hallucinations may be tactile, kinesthetic, visual, or auditory. The most common of these experiences is the “sensed” presence accompanied by fear.

Even with no further information or untoward incidence, many respondents appear to have an immediate intuition that the presence is someone or something to be feared and commonly interpreted as possessed of a malevolent, evil intent. Some descriptions never become elaborated beyond a sense of dread, and a fear of impending doom and even death, provoked by this evil presence.

The sense of evil is often made concrete by the experience of the presence as a devil, demon, or other inhuman, even unnatural, creature.

Physiologically, it is closely related to the normal paralysis that occurs during REM (rapid eye movement) sleep, also known as REM atonia. In that, some scientists and physicians believe it to be a “natural” effect of the sleep cycle. Sleep paralysis occurs when the brain is awakened from a REM state into essentially a normal fully awake state, but the bodily paralysis is still occurring. This causes the person to be fully aware, but unable to move. In addition, this state may be accompanied by hypnagogic hallucinations.

Researchers have pretended that sleep paralysis occurs in order to prevent the body from manifesting the sleeper’s dreams which may be linked to post-synaptic inhibition of motor neurons in the pons region of the brain. In particular, low levels of melatonin may stop the depolarization current in the nerves, which prevents the stimulation of the muscles, to prevent the body from enacting the dreamt activity (ie. preventing a sleeper from running when dreaming about running).

There is also a significant positive correlation between those experiencing this disorder frequently and those suffering from narcolepsy. 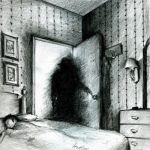