In a field trip that he made in the spring of 1949 in the Zempline district of East Slovakia, the Slovak scholar Jan Mjartan investigated the local beliefs concerning vampires. In 1953 he published a summary of his findings titled Vampirske povery v Zempline in the Slovak academic journal Slovensky nardopis, Vol. 1, p. 133.

Mjartan found that the local name for a vampire is nelapsi. The nelapsi attacks cattle and people. He both sucks the blood and suffocates his victims. It can also kill a person by a single glance. By bringing a plague, the nelapsi can kill a whole herd or an entire village.

The ways to prevent a person who dies from becoming a nelapsi include:

The relevant excerpt from Jan Mjartan’s article is translated into English by Jan Perkowski on pages 102-03 of his book, The Darkling (Slavica Publishers, 1989). 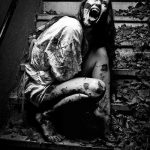