A fairy tale originally collected by the brothers Grimm.

Snow White, a princess, is banished to the forest by her wicked stepmother, who is jealous of Snow White’s great beauty. Alone in the forest Snow White finds the cottage of the Seven Dwarfs. She offers to keep house for them in return for shelter. But the wicked queen finds her and tries to kill her. Twice the dwarfs manage to save her. The third time the wicked queen makes Snow White bite into a poisoned apple, which sticks in her throat. Snow White falls down, apparently dead. When the Dwarfs cannot revive her, they place her in a glass coffin. A prince comes riding by, and is so struck by her beauty that he lifts her up to kiss her. The poisoned apple falls from her lips, and Snow White comes back to life. The prince and Snow White live happily ever after. The wicked stepmother dies of envy.

In 1937, Walt Disney turned the story into an animated cartoon film. In the film the dwarfs have been given names, and distinct personalities to match those names – Doc, Happy, Sleepy, Grumpy, Sneezy, Bashful and Dopey. The film has remained extremely popular, so much so that most people today visualise dwarfs as Disney portrayed them – funny little men in pointed hats.

This is a fairy tale originally collected by the brothers Grimm.

Two little girls called Snow White and Rose Red live in a little cottage with their mother. One winter evening, a bear knocks at their door, asking for shelter from the cold and the snow. The bear becomes a regular visitor to the cottage in the winter, and a good friend of the children. In summer he goes away, saying he has to protect his treasure from wicked dwarfs.

Soon after, the two little girls meet an old dwarf in the forest. The dwarf is always in trouble, and the girls always help him out, but receive no thanks for it. The dwarf is rude and bad-tempered. Finally the bear appears and kills the dwarf. He sheds his bearskin and turns into a handsome prince. He explains that the dwarf had stolen his treasure and had doomed him to roam the forest as a bear. The dwarf’s death had freed him.

Snow White marries the bear, and Rose Red his brother, and they divide up the treasure equally between them.

A fairy story written by Mme d’Aulnoy, it first appeared in 1698 in French. It had been translated into English by 1721.

Princess All-Fair agrees to marry the Yellow Dwarf in order to save herself from the lions guarding the Desart Fairy. But she does not intend to keep her promise, and decides to marry the King of the Golden Mines instead. At the wedding of All-Fair and the King, the Desart Fairy appears, reminding All-Fair of her promise, and declaring that such an insult to the fairies would not be tolerated. The Yellow Dwarf appears and carries off All-Fair. The King of the Golden Mines tries to rescue her with the help of a mermaid. At the very last moment, the Yellow Dwarf overpowers him, and he is killed. All-Fair dies as well. The mermaid then transforms them into a pair of palm trees growing side by side. 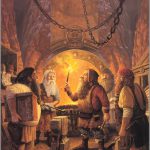