Spirit photography is a type of photography whose primary attempt is to capture images of ghosts and other spiritual entities, especially in ghost hunting. It was first used by William H. Mumler in the 1860s.

Mumler discovered the technique by accident, after he discovered a second person in a photograph he took of himself, which he found was actually a double exposure. Seeing there was a market for it, Mumler started working as a medium, taking people’s pictures and doctoring the negatives to add lost loved ones into them (mostly using other photographs as basis). Mumler’s fraud was discovered after he put identifiable living Boston residents in the photos as spirits. 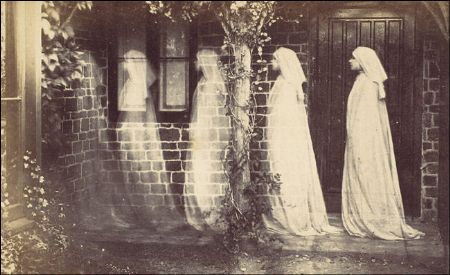 A digital camera is a good way of alerting others as to where the ghostly anomalies are positioned because you can immediately view the photo and see the orbs or ectoplasm. The digital camera should have a built-in flash, exposure/shutter control and at least 5M definition.

However, a lot of people are mistaking digital photos for paranormal anomalies captured in the photo and that may suggest that the digital format may not be as effective as a film camera, but this is not the case.

The most common mistakes are orbs that are the result of capturing airborne dust, pollen, or mositure orbs floating in front of the camera lens and lens flare is still common when inexperience photographers point their camera toward the sun and snap photos.