Mission: St Georges defeated the dragon to rescue the king’s daughter from becoming the dragon’s tribute, and as a result is believed to have converted the people to Christianity. 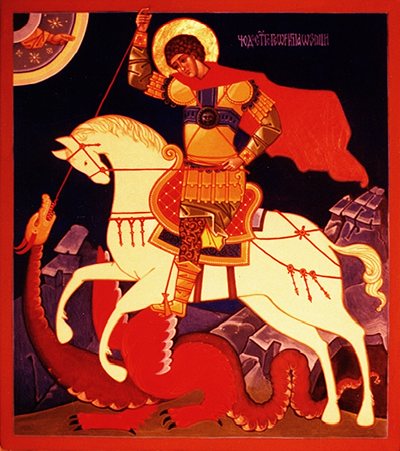 Myth :Saint George was originally a Roman Calvary officer who was known for his courage in war. In the Western version of the legend, which developed as part of the Golden Legend, a dragon makes its nest at the spring that provides water for the city of "Silene" (perhaps modern Cyrene) in Libya or the city of Lydda, depending on the source.  At first, the townsfolk fed sheep to the dragon, but eventually, they ran out of sheep. Then they began to feed maidens to the dragon, but soon only the princess was left. Whilst she was tied up, St. George came by, slayed the dragon with the lance he had in his hand while charging with his huge steed, and returned the princess to the town. In the medieval romances, the lance with which St George slew the dragon was called Ascalon, named after the city of Ashkelon in Israel.

In another version, the dragon is rather nice and is not conscious that it is no good to eat human flesh. He stayed because he assumed that the townsfolk feed him because they like him. Then St. George and the princess converted the dragon to Christianity and lead back to the town.

Symbol : St George, Martyr and Patron Saint of England, has long been considered to be one of the main existing symbols of the Christian attempt and to some degree success to outlaw and defeat Paganism which was heavily practised. Saint George’s red cross became the banner of England.