Augustine Calmet, in his Dissertation on Vampires appended to his Dissertation upon the Apparitions of Angels, Demons, and Ghosts (English translation, 1759), gave several instances of vampirism:

“It is now about fifteen years since a soldier, who was quartered in the house of a Haidamack peasant, upon the frontiers of Hungary, saw, as he was at the table with his landlord, a stranger come in and sit down by them. The master of the house and the rest of the company were strangely terrified, but the soldier knew not what to make of it. The next day the peasant died, and, upon the soldier’s enquiring into the meaning of it, he was told that it was his landlord’s father who had been dead and buried above ten years that came and sat down at table, and gave his son notice of his death.

“The soldier soon propagated the story through his regiment, and by this means it reached the general officers, who commissioned the count de Cabreras … to make an exact enquiry into the fact. The count, attended by several officers, a surgeon, and a notary, came to the house, and took the deposition of all the family, who unanimously swore that the spectre was the landlord’s father, and that all the soldier had said was strictly true. The same was also attested by all the inhabitants of the village.

“In consequence of this the body of the spectre was dug up, and found to be in the same state as if it has been but just dead…. The count de Cabreras ordered its head to be cut off, and the corpse to be buried again. He then proceeded to take depositions against other spectres of the same sort, and particularly against a man who had been dead above thirty years, and had made his appearance there several times in his own house at meal-time. At his first visit he had fastened upon the neck of his own brother, and sucked his blood; at his second, he had treated one of his children in the same manner; and the third time, he fastened upon a servant of the family, and all three died upon the spot.

“Upon this evidence, the count gave orders that he should be dug up, and being found, like the first, with his blood in a fluid state, as if he had been alive, a great nail was drove through his temples, and he was buried again. The count ordered a third to be burnt, who had been dead above sixteen years, and was found guilty of murdering two of his own children by sucking their blood.

Other cases alluded to by Calmet are as follows:

“In the part of Hungary … on the other side of the Tibiscus,… the people named Heydukes have a notion that there are dead persons, called by them vampires, which suck the blood of the living, so as to make them fall away visibly to skin and bones, while the carcasses themselves, like leeches, are filled with blood to such a degree that it comes out at all the apertures of their body. This notion has lately been confirmed by several facts.

“The gentleman who acquainted me with all these particulars, had them from the count de Cabreras himself, at Fribourg in Brisgau, in the year 1730.”

“About five years ago, an Heyduke, named Arnold Paul, an inhabitant of Medreiga, was killed by a cart full of hay that fell upon him. About thirty days after his death, four persons died suddenly, with all the symptoms usually attending those who are killed by vampires. It was then remembered that this Arnold Paul had frequently told a story of his having been tormented by a Turkish vampire, in the neighbourhood of Cassova, upon the borders of Turkish Servia (for the notion is that those who have been passive vampires in their life-time become active ones after death; or, in other words, that those who have had their blood sucked become suckers in their turn) but that he had been cured by eating some of the earth upon the vampire’s grave, and by rubbing himself with his blood.

This precaution, however, did not hinder him from being guilty himself after his death; for, upon digging up his corpse forty days after his burial, he was found to have all the marks of an arch-vampire. His body was fresh and ruddy, his hair, beard, and nails were grown, and his veins were full of fluid blood, which ran from all parts of his body upon the shroud that he was buried in. The hadnagy, or bailiff of the village, who was present at the digging up of the corpse, and was very expert in the whole business of vampirism, ordered a sharp stake to be drove quite through the body of the deceased, and to let it pass through his heart, which is attended with a hideous cry from the carcass, as if it had been alive.

This ceremony being performed, they cut off the head, and burnt the body to ashes. After this, they proceeded in the same manner with the four other persons that died of vampirism, lest they also should be troublesome. But all these executions could not hinder this dreadful prodigy from appearing again last year, at the distance of five years from its first breaking out. In the space of three months, seventeen persons of different ages and sexes died of vampirism, some without any previous illness, and others after languishing two or three days.

Among others, it was said, that a girl, named Stanoska, … went to bed in perfect health, but awoke in the middle of the night, trembling, and crying out that the son of the Heyduke Millo, who died about nine weeks before, had almost strangled her while she was asleep. From that time she fell into a languishing state, and died at three days’ end. Her evidence against Millo’s son was looked upon as a proof of his being a vampire, and, upon digging up his body, he was found to be such.

“At the consultation of the principal inhabitants of the place, … it was considered how it was possible that the plague of vampirism should break out afresh, after the precautions that had been taken some years before: and, at last, it was found out that the original offender, Arnold Paul, had not only destroyed the four persons mentioned above, but had killed several beasts, which the late vampires, and particularly the son of Millo, had fed upon. Upon this foundation a resolution was taken to dig up all the persons that had died within a certain time. Out of forty were found seventeen, with all the evident tokens of vampirism; and they had all stakes drove through their hearts, their heads cut off, their bodies burnt, and their ashes thrown into the river.” 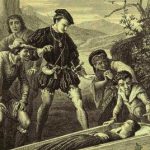