A vampire usually lusts after a person because of two distinct factors. Blood as nourishment to survive and a great sexual desire that none can fill.

The great excess and the lengths that only a real true vampire can go after to fill their own desires. Vampires are know to gorge themselves and then return to their resting places at dawn, to only bask in the feeling of being over stuffed with human blood. They can’t seem to get enough to fill their appetites. True blood real vampires living or dead always want more. Because of this unless it is only your blood they want they will leave you for dead.

Vampires are thought to rule the financial world for all ages. They surround themselves with a mass great trove of golden and jeweled treasures. If you don’t die… then whatever you own or have is only yours until your impaled or exposed to the great light of their own personal beliefs.

A vampire sleeps all day and plays with it’s prey all nigh. No they do not need to work to sustain their vampire sub cultured lifestyle.

Vampires have deep rooted angers against those that will not let them have their way. Often they tend because of this to take it out all the time on those that they toy with.
Love-Hate relationship seem to be totally vampiric in nature. And until a true vampire has shown his wrath upon you . You do not know what real hatred and anger is.

Many less adept vampires succumb to this as the first level of the vampires bite touches their soul. Vampires want to feel content and happy all the time.” ie: Feel no pain of the mortal world.” The real vampire never wants to feel the pain of living a normal life. To enjoy the time when only the fearless would venture out after dark. they want to possess all and especially the courage to do all with fear of no retaliation of death stopping them. Vampires usually envy those that do what they want. Have no regrets or remorse of day to day life. and these are their true tortured victim’s they seek out . The person who loves to party and the feeling that they will live forever and nothing can touch them. And these are the poor souls the vampire truly hunts for.

They say this is why a vampire cannot see themselves in a mirror. Or dare not walk upon holy consecrated ground. Vampires believe they are the true sons of Gods. the immortals that have no “Boss Vampire” or wicked tormentor to rule them.

If you realize that the seven deadly sins are all what a vampire commits and why they are damned until they can really be put to rest. The only salvation a vampire actually has is to find their true love and die together in an eternal lovers embrace. Otherwise many think such creatures are sure to root in the stench filled bloodied sewers of hell. 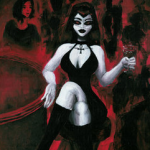