The first officially-recorded poltergeist activity occurred in December 1716 at the Parsonage  in the small town of Epworth, Lincolnshire in England.

All members of the Wesley family heard loud rappings and noises over a period of two months. Sometimes the noises were of a specific character, according to the well-kept notes of Mrs. Wesley. During one incident when she and her husband were descending the stairs one day they heard a noise as if someone was emptying a large bag of coins at their feet. This was followed by the sound of glass bottles being "dashed to a thousand pieces." Other sounds heard were running footsteps, groans, and a door latch being lifted several times. 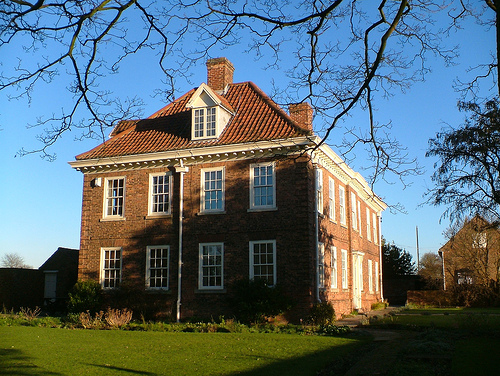 The main disturbances lasted with intervals for two months, December and January 1716-17, and broke out occasionally afterward. The contention that they still recurred a generation later is based on a letter by Emily Wesley, dated February 16, 1750, containing this passage: "Another thing is that wonderful thing called by us Jeffrey. You won’t laugh at me for being superstitious if I tell you how certainly that something calls on me against any extraordinary new affliction; but so little is known of the invisible world that I am at least not able to judge whether it be friendly or an evil spirit."

The phenomena were first attributed to trickery, then to the devil, although Samuel’s wife, Susannah Wesley, disagreed with the latter hypothesis. Instead, she connected it with the fate of her brother who, in the service of the East India Company, disappeared and was never heard of again. It was not proved that the rappings were caused by his discarnate agency, but the members of the family took it for granted after a while that "Old Jeffrey" was involved in the manifestations, which appeared to be connected mostly with Hetty Wesley. She was noticed to tremble strongly in her sleep when the knockings occurred.