The Headless Horseman is a legendary creature harbinger of death in European, Indian and American folklore. The figure is traditionally depicted as a man upon horseback who is either carrying his head, or is missing his head altogether, and is searching for it.

In Irish folklore, the horseman is referred to as the Dullahan. The earliest variants come from 6th century (500s) and the story is most likely a relic from Pagan religions. Christian missionaries banned the worship of Crom Dubh, the Celtic god of fertility. Every year, he demanded human sacrifices, usually created using decapitation. Once they banned his worship, the locals turned him into a terrifying figure that still demanded corpses. Eventually, Crom Dudh fell out of the stories, and the horseman became the Dullahan.

The horseman is also said to wield a whip made of a human spine and is accompanied by a Banshee. According to the folklore, if the Dullahan is watched he may gouge out that person’s eyes with his whip or he may toss a basin of blood on the watcher. In still other variants, the horse is sometimes headless, but most often it has head and breathes fire through its mouth and nostrils. Finally, if the Dullahan stops riding death occurs and if the Dullahan calls out your name; you die immediately. There is no defense against the horseman – except gold, as the Dullahan is said to have an irrational fear of the coveted ore.

Reverend John O’Hanlon claimed the Dullahan only acted as an omen of death for the rich families in the area. Apparently his black carriage, the Cóiste Bodhar, “had no sound as it passed by on the road, which was usually how one determined it was of an otherworldly character” (Irish Folklore: Traditions and Superstitions of the Country, 1870). Here he becomes conflated with the banshee, announcing deaths in prominent Irish families.

Scottish legend has it that in the valley of Glen More at Glen Cainnir on the Isle of Mull in the 16th century, there was tension in the Maclaine clan. As a Scottish writer at the Hazelnut Tree recounts, Iain Og, the clan chief, found himself in a dispute with his son Ewen after he denied him property. In 1538, the two planned a mass duel. However, the day before the duel, Ewen came upon a fairy washing blood out of clothes who predicted that if his servant failed to serve him butter at breakfast the following day, he would not survive the duel. Sure enough, butter failed to be on Ewen Maclaine’s breakfast table.

In the duel, one of Iain’s followers beheaded Ewen. Ewen’s horse, terrified, sprinted away with just Ewen’s body strapped in the saddle. Ever since, the specter of a body riding on a black horse has haunted Glen Moore. It’s said that if a member of the Maclaine clan sees the headless horseman, it’s foretelling an imminent death in their own family.

Sir Gawain and the Green Knight is a late 14th-century chivalric romance in Middle English. The story describes how Sir Gawain, a knight of King Arthur’s Round Table, accepts a challenge from a mysterious “Green Knight” who dares any knight to strike him with his axe if he will take a return blow in a year and a day.

Gawain accepts and beheads him, at which the Green Knight stands, lifts his own head up with one hand and rides from the hall, challenging Gawain to meet him again one year later.

The Headless Horseman also appears in Grimm Brothers fairytale fame. According to the Grimm brothers, in Dresden in Saxony a woman went out early one Sunday morning as she was gathering acorns in a forest near a place called “Lost Waters.” She then heard a hunting horn, and then, when hearing the horn again she turned and saw a headless man in a long grey coat sitting on a grey horse.

In a second story, set in Brunswick in Lower Saxony, the headless horseman is called “the wild huntsman.” As the legend goes, the man named Hackelberg is so devoted to hunting that, as he dies, rather than go to Heaven, he begs God to keep him on Earth to hunt. Hackelberg then became the Wild Huntsman, roaming the woods with his fiery hounds on an eternal hunt. He sound a horn to warn hunters not to ride next day, or they will meet with a deadly accident.

In still other variants collected/published by the Grimm brothers, the horseman is said to seek out perpetrators of capital crimes and in other tales the horseman is accompanied by black hounds with tongues of fire.

Either way, jhinjhārs are the result of a wrongful death. These spirits protect innocent people and are rumored to fight mounted and unmounted. They may be repelled with powdered indigo dye, which disrupts their chaotic energy and allows them to find peace.

In Washington Irving’s 1820 short-story the “Legend of Sleepy Hollow”, the headless horseman harasses School teacher Ichabod Crane chasing him through the sleepy village’s dark and desolate back roads. It is only the safety a nearby bridge/water which offers escape from the horseman as the monster is unable to cross these natural features.

The horseman is supposedly one of 548 German soldiers killed in a battle for Chatterton Hill during the American Revolution in 1776, – his head severed from his body by a well fired cannon ball.

Although the village of Sleepy Hollow was originally fictional, Irving did stay in and base his tale on a real section of Tarrytown, New York—which was actually renamed Sleepy Hollow, adding legitimacy to the story.

El Muerto was first published in print 1865 or 1866 by Thomas Mayne Reid and centers on an outlaw, Vidal, who was stealing cattle all over South Texas in the 1850s. To put Vidal’s illegal activities to an end, Texas Ranger Creed Taylor and Native American Big Foot Walace tracked Vidal down and beheaded him. The two men then took Vidal’s headless body, tied his body to his horse and set it free in the Texan desert.

Soon thereafter cowboys spotted the horse with its headless cargo and, even in 1917 and 1969 people have allegedly seen a horse with a headless rider galloping through the Texan night. 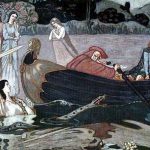 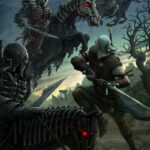