The fairy tradition in literature begins in the 1380s, with Chaucer and Gower. In their eyes, the fairies are already a vanishing race, partly frightening and partly comic. The implication (particularly in the preamble to The Wife of Baths Tale) is that people used to believe in fairies, but dont do so any more. However, the fairy mythology as a consistent set of beliefs (dancing in rings, living in hills, the rule of a queen, and so on) is itself created by the writers who claim to be recording its final echoes. Earlier evidence does not describe these fairies. Instead it details encounters with various supernatural beings who were, in retrospect, treated as if they had been citizens of fairyland.

In short, the origins of the fairy mythology lie not in the remote past, but at the court of Richard II. The creative synthesis which the poets, from Chaucer to Shakespeare, made out of English and French traditions was developed in the Tudor period to include tricksters of the Robin Goodfellow type as well as the familiar spirits of cunning men, and domestic spirits like the brownie.

As an English-language tradition, it was able to dominate and then change the native sidhe beliefs of Ireland and the Highlands, introducing alien notions such as small size into their narrative. By the nineteenth century, it was possible for Anglo-Saxon spirits like the grima, scucca and thyrs – who had lived out a quiet rural existence as Church Grims, Black Shucks and Hobthrusts – to find themselves reinterpreted by folklorists (not the folk!) as minor figures in the fairy mythology.

Shakespeares Titania and Oberon are King and Queen of the blithe subjects of the fairy kingdom forming part of the supernatural spectrum of A Midsummer Nights Dream. Such benevolent fairies have become the current archetype and todays children are brought up to think of fairies as diminutive beings of kindly disposition. This had a major impact on how the populace of Europe as a whole viewed the fairy, including the Irish, who had traditionally worshipped the Tuatha De Danann. 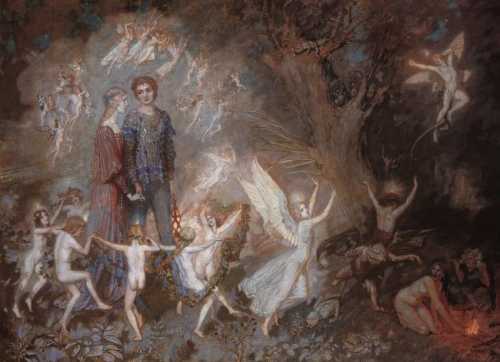 The fairy ladies of eras past were no longer in style by the 16th century. Nymphs, brownies, hobgoblins, and the classic fairy with gossamer wings become popular in tales and stories. Common literature of the time was suddenly flooded with references to these mythological creatures.

The writers of the age supplied the very first look into the social structure of the tiny fairy. Individual writers chose different traits to emphasize, but on the whole, they managed to give a literary version of the fairy and its social life. The Elizabethan Faeries were seen as living in a monarchy, almost a parody of the monarchies present throughout the British Isles and various other areas of Western Europe.

By the end of the 15th century, the Diminutive Fairy had changed again, not necessarily in appearance, but in nature. This new breed of fairy was pesky and bothersome, and rarely helpful of kind to humans. Appearing in the 16th century, this new fairy eventually came to be known as the Elizabethan Fairy.

The physical appearance of the standard modern fairy has its roots in Elizabethan times. Elizabethan Fairies were tiny little things, occasionally with gossamer wings, and were usually described as being female. Often lovelier than any human woman, these fairies tended to wear little in the way of clothing.

The Elizabethan Fairy were not seen as evil. However, they were considered pests and most regular citizens went to great lengths to avoid contact with these beings of myth and legend. It was said that these fairies would torment humans for simple entertainment, though they did not typically seek to harm. Harm would instead happen by accident. For many people, fairies were spirits against which they had to guard themselves by ritual precautions.

In the 17th century, the faery is more commonly associated with the Devil. The Jacobean Fairy is described as being as very small and malicious towards people. They were also considered somewhat of a nuisance and often warded against.

The Jacobean Fairy were said to have many powers. They could affect the seasons, controlling when the seasons changed. The fairies could turn a good harvest into dust. They could withhold the spring rains, causing drought. And in some cases, they were credited with prolonging the winter, causing starvation when the food ran out.

As the 18th century arrived, the nature of the fairy changed once again. The Jacobean Fairy lost its tendency towards evil, and reconnected with the powers of nature. As this happened, the Faery Lineage split into the Flower Fairy and the Folk Tale Fairy. Both of these forms have endured into modern times, but it is the Flower Fairy that most people envision when they hear the term fairy.

The Victorian Age was a time of great industrialization and a moving away from the romanticism that preceded the period. It was an age where the was a clear breaking away from mysticism that dominated even scientific ideals and what replaced it, was logic and reason.