Mina Crandon (more commonly known as Margery) is, perhaps, the most controversial medium in the history of Spiritualism. The most astounding aspect of the Margery mediumship was the diversity of phenomena which occurred. They ranged from breezes, raps, trance and trance writing in several languages, to materializations, independent voice, apportations, and the production of paraffin gloves and finger prints. 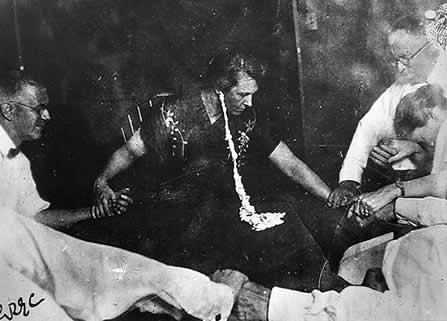 She was born in Canada, in 1888. In 1918, after one unsuccessful marriage, she married Boston surgeon Dr. Le Roi Goddard Crandon, a man whose family dated back to the Mayflower.  "Margery" had met Crandon when he performed surgery on her in 1917. They purchased the house at Number 11 Lime Street, on Beacon Hill, and became well established in Boston society.

Crandon was a materialist, but one day he read W. J. Crawford’s book on the Goligher Circle, and partly as a joke, partly out of curiosity, he began to experiment in his home. His wife, in a chance visit to a clairvoyant, received a communication from the alleged spirit of her older brother Walter Stinson, who was killed in a railroad accident years before. The first sitting in the Crandon house was held during May 1923. Out of six sitters Margery alone was found to have the power of animating the table. Answers were "tilted out" and gradually she developed as a medium.

Raps came as the second stage and trance as the third. Joining hands replaced table contact and Margery withdrew into a cabinet. But the trance was only intermittent. She remained alert for the better part of the sitting and only went into a trance when "Walter," the spirit, had a lot to say. He was in full charge of the proceedings; messages of lesser spirits had to be relayed through him.

Automatic writing, psychic music, and finally direct voice completed the development of Margery’s mediumship. With the advent of the latter the trance phase was abandoned. Power ran high and the cabinet, as a demonstration, was wrecked by invisible hands. Clocks were stopped at announced times and Walter’s activity was noticed all over the house. In the next few years hundreds of newspaper and magazine articles appeared about her.

”In addition to the celebrity gained by Crandon’s ethereal brother, Mina herself became well-known for her risqué and sometimes bizarre séances. It was not uncommon for her to hold sessions in the nude and according to some, she was especially adept at manifesting ectoplasm from her vagina. It was also rumored that she had affairs with some of her would-be investigators, thus silencing a few of her most vocal critics.”