The vanishing hitchhiker is an urban legend in which people traveling by vehicle, meet with or are accompanied by a hitchhiker who subsequently vanishes without explanation, often from a moving vehicle.

It is a dark and stormy night. A person driving sees a forlorn figure at the side of the road and decides to give him or her a lift. Usually the hitchhiker is a young woman in some sort of trouble… her prom date dumped her, or her car broke down. The driver gets to her house only to discover that his passenger has disappeared without a trace from the back seat of his car.

He knocks on the door to the house, maybe to make sure the girl is ok, and the door is answered by the girl’s parent. Eventually it comes out that the girl died some years ago, and every year on the anniversary of her death (or her birthday), the girl hitches a ride back home with a stranger.

There is a similar story which is about two travelers sitting next to each other on a train (normally a man and a woman). One of them is reading a book and the other person asks what the book is about, and the first person says that it’s about ghosts. They then have a conversation about ghosts, and the second person asks the first if they believe in ghosts or have ever seen one, to which the first person says that they have never seen or believed in ghosts at all. The second person replies that this is doubtful, and vanishes.

Not all vanishing hitchhiker legends involve ghosts. One popular variant in Hawaii involves the goddess Pele, traveling the roads incognito and rewarding kind travelers, other variants include hitchhikers who utter prophecies (typically of pending catastrophes or other evil events) before vanishing. The legend of Saint Christopher is considered one of these, and the story of Philip the Evangelist being transported by God after encountering the Ethiopian on the road (Acts 8:26-39) is sometimes similarly interpreted.

Jan Harold Brunvand’s in his book The Vanishing Hitchhiker, suggests that the story of The Vanishing Hitchhiker can be traced as far back as the 1870s and has “recognizable parallels in Korea, Tsarist Russia, among Chinese-Americans, Mormons, and Ozark mountaineers.” Similar stories have been reported for centuries across the world. 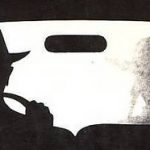