In 1932, Victor Halperin directed White Zombie, a horror film starring Bela Lugosi that relies on atmosphere and expressionistic sets and is often regarded as the first legitimate zombie film ever made. Bella was never better than he was as Murder Legendre, a cruel landlord who can turn people into zombies with the power of his mind (and his cool eyebrows). Here zombies are depicted as mindless, unthinking henchmen under the spell of an evil magician.

The 1936 film Revolt of the Zombies is similar (Cambodia this time) and has the added oddity of having used stock footage of Bela Lugosi’s eyes in several close ups.

Other zombie films of the 30s include Ouanga (1935), also set in Haiti and featuring a voodoo priestess. The main character raises two zombies in order to exact revenge on her ex-lover’s new white fiancee. The film was remade in Jamaica in 1939 with an all-black cast as Pocomania.

The 1936 film Things to Come, based on the novel by H.G. Wells, anticipates later zombie films with an apocalyptic scenario surrounding “the wandering sickness”, a highly contagious viral plague that causes the infected to wander slowly and insensibly, very much like zombies, infecting others on contact.

I Walked With a Zombie (1943) from Jacques Tourneur is another voodoo zombie movie of that period. 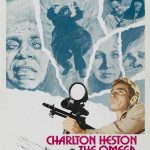