Our purpose is to analyze the reason for the wolf to be the creature of choice for metamorphosis. Usually, a person is deemed to take the form of the most dangerous beast of prey of the region: the wolf or bear in Europe and northern Asia, the hyena or leopard in Africa, and the tiger in India, China, Japan, and elsewhere in Asia; but other animals are mentioned too. Both the superstition and the psychiatric disorder are linked to the belief in animal guardian spirits, vampires, totemism, witches, and werewolves.

In Europe, the degree of terror and obsession the werewolf tends to inspire in the human mind may be caused by several fundamental reasons that relate with the real wolf: The wolf frightens the humans because of its howling, its glow-in-the-dark yellow eyes, its hunting ability, its silent walking, and its nocturnal activity. These characteristics are easily related and explained through supernatural and/or demonic phenomena. Medieval and later chronicles describe wolf attacks on humans during hard winters and wartime. The development of the concept of werewolves may also be attributed to the vicious warriors in northern Europe, known as wolfmen or berserkers. These notoriously murderous and feared men clad themselves in suits made from wolf pelts. 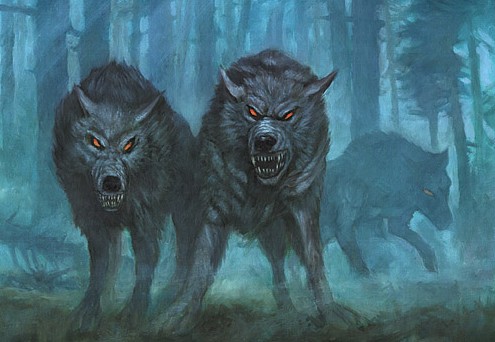 In Europe and North Asia, wolves were considered the most dangerous animal to man and his livestock. In France, there were special government institutions for wolf control from at least the regin of Charlemagne (768-814 AD) which remained in place well into the 20th century.  Single wolves gained the kind of notoriety reserved these days for serial-killers – the ‘Beast of Gevaudan’ who roamed the South of Auvergne from 1764 to 1767 and killed at least 60 people.  Packs were even more feared and alarming.  In 1439, during civil war between the followers of the Count of Armagnac and those of the Duke of Burgundy, opportunistic and hungry wolves roamed right into Paris and proceeded to kill and eat 14 people in as many days.

And after Cromwell’s 1649 campaign in Ireland, wolves were such a serious problem that there was a five pound bounty on wolf heads, the same princely sum being offered for Catholic priests.  So there we have it: wolves were not popular. They were seen as clever and evil animals. They dared to take on man, occasionally winning, and in doing so, were attributed with seeming almost human, manifesting some of out worst fears about our suppressed animal instincts.

Ever since prehistorical times man and wolf have been hunting rivals. Because of technological advancements, the man has managed to surpass the wolf’s hunting prowess; nevertheless, this rivalry unconsciously persists in the man’s mind.

The man has sought the wolf’s extermination because of superstition, and justified it with the purpose of saving other animal species from the wolf’s predation. The truth is the wolf is an integral part of its environment, since the animals it hunts are, in general, the weak, old or sick.

Due to the man’s devastation of the natural ecosystems, the wolf must look after a new way of providing itself food and shelter. If the native species are substituted with farm animals, the wolf will hunt them instead. The deaths of farm animals by wolves are, almost in their entirety, caused by urbanization.

The vast literature  about wolves has given them a bad reputation since ancestral times. The wolf has many human-like social ways to behave (hierarchy, monogamy, pack protection, etc.) which are always obscured by the image of the ruthless, blood-thirsty beast.