According to legends, there are three species which have a general resemblance despite differences in size.

Description:Diog thinks he is probably a gibbon (a known type of ape) that may live as far north as Nepal, though it’s never been spotted past the Brahmaputra River in India.

Description:. The giant yeti has dark fur and a flat head and has been said to roam and often attack cattle. Diog thinks this is probably the Tibetan blue bear. A creature so rare it is known only in the west through a few skins, bones and a skull 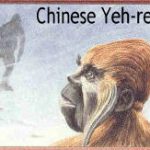