One speculation of the Chupacabras’ origin is that it is either an offshoot or an abandoned pet of other intelligent beings that came to Earth a long time ago.

Luminous oval and pyramidal shaped UFOs have been seen in the vicinity where animals have been mutilated and found to be without blood. These have been reported in the towns of Cabo Rojo, Canovanas, Ponce and Naranjito. In Barrio Hato, the Rojas family observed a UFO. A horse and several goats were found mutilated shortly after the observation.

Disinformation and debunking campaigns appeared organised through UFO groups stating "Chupacabras" belong to a voracious reptilian race of creatures, alien in origin, who have started "devouring the populace. 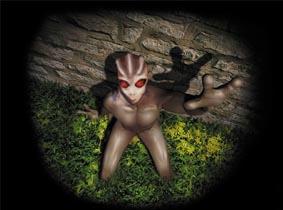 The Chupacabras is also believed to be the result of secret government experiments in genetics. Some pretend that the lethal ‘orange agent’ and other dioxine-based chemical agents as well as gamma radiation tests have been tested in several places by the US Government on the island’s population and territory for decades. Knowing that thanks to genetic manipulations, incredible new breeds of animals and plants can appear, it is quite possible that the Chupacabra could have been developed by humans.

The Chupacabra was once believed to be El Vampire de Moco, another legendary mauler of animals of Puerto Rico which turned out to be crocodiles illegally released onto the island.

The Chupacabras, or aliens that we are seeing would be humans of the future…. our own children…. travelling through time in order to prevent the chemical crisis that caused them to evolve into chupacabras. Our future-humans arrive at critical times in order to either warn us or attempt to prevent the progress of the technology that will go awry and cause physical mutations.

Throughout the killings, the authorities have claimed the deaths are due to attacks from groups of stray dogs, baboons or exotic animals illegally introduced in the island’s territory. The director of Puerto Rico’s Department of Agriculture Veterinary Services Division, Hector Garcia, has stated that, "it could be dogs, that the small puncture wounds observed in the victims necks are similar to those inflicted by the fangs of canines."

He also stated that no other unusual features have been observed in the dead animals examined by his division, and this included no loss of blood. Veterinarian Angel Luis Santana, of the private Gardenville Clinic, in San Juan, said, "it could be a human being who belongs to a religious sect, even another animal. It could also be someone who wants to make fun out of the Puerto Rican people. Loren Coleman agrees and is comfortable with the wild dog explanation. "Dog packs tend to do that, go on frenzied attacks, eat a little, then leave the rest." 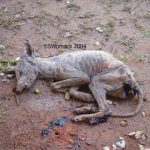