Many versions of water monsters resemble dinosaurs, such as the plesiosaur dinosaur. Most scientists believe that these marine reptiles have been extinct with the dinosaurs for 60-70 million years, but others think it possible that after the last Ice Age some of these dinosaurs may have been stranded to the Loch that was connected to the sea.

Plesiosaurs were a group of long-necked, predatory marine reptiles with four paddle-like limbs. They belonged to a family known as Elasmosaurus, or thin-plated lizard which included dozen of species, the largest perhaps fifty feet long. The animal, which had a neck equal in length to the rest of its body and a tiny 30 centimetre (foot) long head, is believed to have had a finned tail which helped it swim the ocean waters using four flippers the size of paddles. 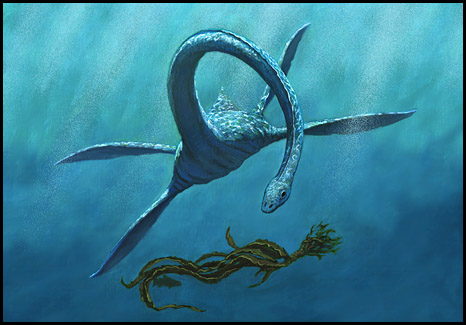 The fossilised remains of a creature with a striking resemblance to the legendary Loch Ness monster has been discovered in northern Australia by palaentologists.

Unlike Nessie, whose existence has never been proved, the five meter (16 feet) long, 700-kilogram (96 stone) plesiosaur found by fishermen west of Cairns in northern Queensland was no joke. It lived in the early Cretaceous period 112 million years ago on a diet of fish and squid.

Others, like David Hall, feel that lake monsters could not possibly be plesiosaurs since plesiosaurs were cold-blooded reptiles that would have preferred warm oceanic currents to cold Scottish Lochs.

Paleontologist Robert Bakker has recently argued that plesiosaurs did not, as once believed, sail unaffected through the extinctions, which punctuated the Age of Reptiles. Instead, the true plesiosaurs died out at the end of the Jurassic period, and similar reptiles quickly evolved to take their ecological niche. If there is a chance that dinosaurs have survived the K-T extinction at the end of the Mesozoic era and lived on to the present day, there are not plesiosaurs but descendants or hybrids.

Another theory supports a snake-like primitive whale known as Zeuglodon.