The Great Tuatha De Danann of Ireland, which is often translated to mean ‘tribe of Danu,’ were the people of the Goddess Danu. The ancient Celts called them the Sidhe, the spirit-race of ancient Ireland. They are the source of the Faery Lineage.

According to the traditional history of Ireland, specifically the Mythological Cycle, the Tuatha De Danann were the fourth waves of invaders to come to Ireland, conquering the Fir Bolg.

Eventually, they would be challenged by the Milesians, and take refuge in the Underworld. They lived there in beauty and joy, never aging, and never knowing pain, disease, or death. They were masters of sorcery and magick, and the Celts often said that the Tuatha De Danann had been sent from the stars to teach humanity about love and living in harmony with nature.

The Tuatha De Danann became a Faery people of Ireland, and many were great warriors under the High Kings of ancient Eire (another name for Ireland). Some of them even eventually became the stuff of legends and fairy tales, even into the modern era.

The Tuatha de Danann flead to Tir Nan Og, the Land of Perpetual Youth, after their defeat by the Milesians, however those who remained in Ireland became the Daoine Sidhe. Side (Shee) is gaelic for ‘people of the hills’. Originally it referred to the mounds in which faeries lived, though it has now come to refer to the inhabitants as well.

Their king is Finvarra, who like all of his clan is a skilled warrior. He is also fond of chess playing and women. Despite the fact that his wife, Donagh, is one of the most beautiful women above or below the ground, he is known to abduct brides-to-be. Like the Seelie Court, the Daoine Sidhe, enjoy riding and are famous for their faerie steeds, which can carry a rider faster than the wind over land or water.

Another group of faeries in Ireland inhabit the Lough Lean. their ruler is O’Donoghue who rides forth from the lake every May Day on a war steed to ride into the surrounding mist. 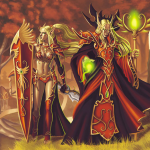