The Universe people or Cosmic people of light powers (Czech: Vesmírní lidé sil svetla) is a Czech movement centered around Ivo A. Benda. Its belief system is based upon existence of extraterrestrial civilizations communicating with Benda and other “contacters” since October 1997 telepathically and later by direct personal contact.

According to Benda, those civilizations operate a fleet of spaceships led by Ashtar (sometimes written Ashtar Sheran) orbiting and closely watching the Earth, helping the good and waiting to transport the followers into another dimension.

The Universe People teaching incorporates various elements from ufology (some foreign “contacters” are credited, though often also renounced after a time as misguided or deceptive), Christianity (Jesus was a “fine-vibrations” being) and conspiracy theories (forces of evil are supposed to plan compulsory chipping of the populace). 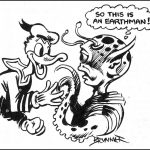 Famous quotes about UFOs and Aliens