The common name of many of these species, vampire moth, refers to the habit that they have of drinking blood from vertebrates. According to a recent study, some of them (C. thalictri) are even capable of drinking human blood through skin. However, the moths are not thought to cause any threat to humans.

Unlike mosquitoes, in Vampire Moths the males does the blood-sucking while the females stick to plant juices and nectar. 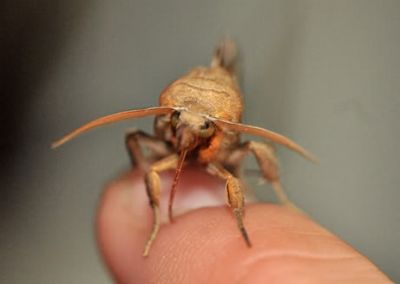 The moths are remarkably similar to a strictly vegetarian moths of the same species, leading scientists to speculate that this blood sucking relative represents a new evolutionary direction. It is thought that originally the ancestors of these moths drank fruit juices by piercing the skin of fruit with a straw-like, pointed proboscis.

From there it was but a small step to biting mammals, thereby tapping a much more potent source of nutrients.

Vampire Moths appear to be expanding their range into more northerly areas due to the global warming. The species Calyptra thalictri was native to Malaysia, the Urals and Southern Europe, but is turning up in northern Europe.