In 2005, Costas Efthimiou, a physics professor from University of Central Florida whose work attempt to debunk pseudoscientific ideas, such as vampires and zombies, made the headline by claiming that vampires are a mathematical impossibility. In Ghosts, Vampires and Zombies: Cinema Fiction vs Physics Reality (PDF), Efthimiou and fellow Sohang Gandhi use math and physics to illuminate inconsistencies associated with the popular myths about ghosts, zombies, and vampires.

"The fact of the matter is," they note, "if vampires truly feed with even a tiny fraction of the frequency that they are depicted to in the movies and folklore, then the human race would have been wiped out quite quickly after the first vampire appeared." 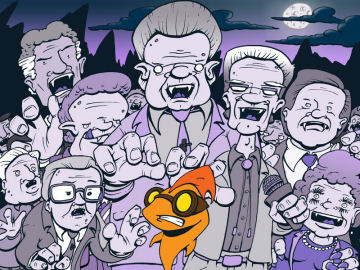 To illustrate this point, the authors of the paper show what would happen if the first vampire made his appearance in the year 1600. They note that the global population of humans at the start of that year is estimated to be 536,870,911. Using the conservative estimate that a vampire would only need to feed once a month, they are able to calculate the effect on the human race. On February 1st, 1600 1 human will have died and a new vampire born.

This logical proof is a type known as reductio ad absurdum, that is, reduction to the absurd. vampires cannot exist, since their existence contradicts the existence of human beings. Another philosophical principal related to our argument is the truism given the elaborate title, the anthropic principle. This states that if something is necessary for human existence, then it must be true since we do exist. In the present case, the nonexistence of vampires is necessary for human existence.

However, not all vampire legends support the belief that vampire victims become vampires and there is no further evidence that such a law would follow a geometric progression. Last but not least, there are many other ways for vampires to survive without proliferating. Vampires are presented exclusively as greedy animals: a rational strategy of managing their human resources is not considered. Blood banks or hospitals for instance could be easy targets for cunning vampires to get fresh supply without having to kill their livestock.