The Vampyre Scene or simply  the Scene is a general term for the social aspects of the vampire subculture including nightclubs, havens, events, businesses, societies, and even the online part of the subculture.

The Scene is quite tolerant against their own needs and related topics and often intermixes with the Gothic scene, the S/M scene and others.

Lifestylers often form alternative extended families and social structures modeled on the “covens”, “sires” or “clans” of vampire fiction and role-playing games. Many also utilize lingo and terminology taken from vampire fiction and RPGs. Some are real vampires in the sense of craving blood, while others are blood fetishists, and still others are just drawn to the “Vampyre aesthetic”.

The subculture is most apparent in North America and Europe, and to a lesser extent in certain parts of South America and Asia. There are active groups, dedicated bars and night-clubs in New York, Philly, L.A, Montreal, London, Berlin, Paris, Moscow, Prague, Tokyo and Melbourne.

Vampyres frequently attend Fetish Scene and Body Scene Clubs, which involve public sadomasochistic activities. It is at the numerous “Scene” clubs where the worlds of body mutilation, piercing, performance art, blood rituals, tattooing, and all forms of bondage and violent sexual activity converge. 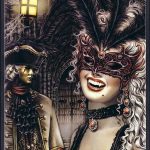