In like manner were wolves’ dresses used. The following curious passage is from the wild Saga of the Völsungs:–

"It is now to be told that Sigmund thought Sinfjötli too young to help him in his revenge, and he wished first to test his powers; so during the summer they plunged deep into the wood and slew men for their goods, and Sigmund saw that he was quite of the Völsung stock. . . . Now it fell out that as they went through the forest, collecting monies, that they lighted on a house in which were two men sleeping, with great gold rings an them; they had dealings with witchcraft, for wolf-skins hung up in the house above them; it was the tenth day on which they might come out of their second state. They were kings’ sons. Sigmund and Sinfjötli got into the habits, and could not get out of them again, and the nature of the original beasts came over them, and they howled as wolves–they learned "both of them to howl. Now they went into the forest, and each took his own course; they made the agreement together that they should try their strength against as many as seven men, but not more, and. that he who was ware of strife should utter his wolf’s howl.

"’Do not fail in this,’ said Sigmund, ‘for you are young and daring, and men would be glad to chase you.’ Now each went his own course; and after that they had parted Sigmund found men, so he howled; and when Sinfjötli heard that, he ran up and slew them all-then they separated. And Sinfjötli had not been long in the wood before he met with. eleven men; he fell upon them and slew them every one. Then he was tired, so he flung himself under an oak to rest. Up came Sigmund and said, ‘Why did you not call out?’ Sinfjötli replied, ‘What was the need of asking your help to kill eleven men?’

"Sigmund flew at him and rent him so that he fell, for he had bitten through his throat. That day they could not leave their wolf-forms. Sigmund laid him on his back and bare him home to the hall, and sat beside him, and said, ‘Deuce take the wolf-forms!"’–Völsung Saga, c. 8.

There is another curious story of a were-wolf in the same Saga, which I must relate.

"Now he did as she requested, and hewed down a great piece of timber, and cast it across the feet of those ten brothers seated in a row, in the forest; and there they sat all that day and on till night. And at midnight there came an old she-wolf out of the forest to them, as they sat in the stocks, and she was both huge and grimly. Now she fell upon one of them, and bit him to death, and after she had eaten him all up, she went away. And next morning Signy sent a trusty man to her brothers, to know how it had fared with them. When he returned he told her of the death of one, and that grieved her much, for she feared it might fare thus with them all, and she would be unable to assist them.

"In short, nine nights following came the same she-wolf at midnight, and devoured them one after another till all were dead, except Sigmund, and he was left alone. So when the tenth night came, Signy sent her trusty man to Sigmund, her brother, with honey in his hand, and said that he was to smear it over the face of Sigmund, and to fill his mouth with it. Now he went to Sigmund, and did as he was bid, after which he returned home. And during the night came the same she-wolf, as was her wont, and reckoned to devour him, like his brothers.

"Now she snuffed at him, where the honey was smeared, and began to lick his face with her tongue, and presently thrust her tongue into his mouth. He bore it ill, and bit into the tongue of the she-wolf; she sprang up and tried to break loose, setting her feet against the stock, so as to snap it asunder: but he held firm, and ripped the tongue out by the roots, so that it was the death of the wolf. It is the opinion of some men that this beast was the mother of King Siggeir, and that she had taken this form upon her through devilry and witchcraft." 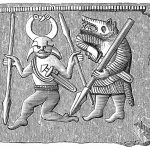