In Prussia, Livonia and Lithuania, according to the bishops Olaus Magnus and Majolus, the werwolves were in the 16th century far more destructive than “true and natural wolves”, and their heterodoxy appears from the Catholic bishops’ assertion that they formed “an accursed college” of those “desirous of innovations contrary to the divine law”.

“In Prussia, Livonia, and Lithuania, although the inhabitants suffer considerably from the rapacity of wolves throughout the year, in that these animals rend their cattle, which are scattered in great numbers through the woods, whenever they stray in the very least, yet this is not regarded by them as such a serious matter as what they endure from men turned into wolves.

“On the feast of the Nativity of Christ, at night, such a multitude of wolves transformed from men gather together in a certain spot, arranged among themselves, and then spread to rage with wondrous ferocity against human beings, and those animals which are not wild, that the natives of these regions suffer more detriment from these, than they do from true and natural wolves; for when a human habitation has been detected by them isolated in the woods, they besiege it with atrocity, striving to break in the doors, and in the event of their doing so, they devour all the human beings, and every animal which is found within. They burst into the beer-cellars, and there they empty the tuns of beer or mead, and pile up the empty casks one above another in the middle of the cellar, thus showing their difference from natural and genuine wolves. . . . Between Lithuania, Livonia, and Courland are the walls of a certain old ruined castle. At this spot congregate thousands, on a fixed occasion, and try their agility in jumping. Those who are unable to bound over the wall, as; is often the case with the fattest, are fallen upon with scourges by the captains and slain.”

note 1 Olaus relates also in c. xlvii. the story of a certain nobleman who was travelling through a large forest with some peasants in his retinue who dabbled in the black art. They found no house where they could lodge for the night, and were well-nigh famished. Then one of the peasants offered, if all the rest would hold their tongues as to what he should do, that he would bring them a lamb from a distant flock.

He thereupon retired into the depths of the forest and changed his form into that of a wolf, fell upon the flock, and brought a lamb to his companions in his mouth. They received it with gratitude. Then he retired once more into the thicket, and transformed himself back again into his human shape.

The wife of a nobleman in Livonia expressed her doubts to one of her slaves whether it were possible for man or woman thus to change shape. The servant at once volunteered to give her evidence of the possibility. He left the room, and in another moment a wolf was observed running over the country. The dogs followed him, and notwithstanding his resistance, tore out one of his eyes. Next day the slave appeared before his mistress blind of an eye.

At Christmas a boy lame of a leg goes round the country summoning the devil’s followers, who are countless, to a general conclave. Whoever remains behind, or goes reluctantly, is scourged by another with an iron whip till the blood flows, and his traces are left in blood. The human form vanishes, and the whole multitude become wolves. Many thousands assemble. Foremost goes the leader armed with an iron whip, and the troop follow, “firmly convinced in their imaginations that they are transformed into wolves.” They fall upon herds of cattle and flocks of sheep, but they have no power to slay men. When they come to a river, the leader smites the water with his scourge, and it divides, leaving a dry path through the midst, by which the pack may go.

The transformation lasts during twelve days, at the expiration of which period the wolf-skin vanishes, and the human form reappears.

This superstition was expressly forbidden by the church.

In a dissertation by Müller note 1 we learn, on the authority of Cluverius and Dannhaverus (Acad. Homilet. p. ii.), that a certain Albertus Pericofcius in Muscovy was wont to tyrannize over and harass his subjects in the most unscrupulous manner. One night when he was absent from home, his whole herd of cattle, acquired by extortion, perished. On his return he was informed of his loss, and the wicked man broke out into the most horrible blasphemies, exclaiming, “Let him who has slain, eat; if God chooses, let him devour me as well.”

As he spoke, drops of blood fell to earth, and the nobleman, transformed into a wild dog, rushed upon his dead cattle, tore and mangled the carcasses and began to devour them; possibly he may be devouring them still (ac forsan hodie que pascitur). His wife, then near her confinement, died of fear. Of these circumstances there were not only ear but also eye witnesses. (Non ab auritis tantum, sed et ocidatis accepi, quod narro).

Similarly it is related of a nobleman in the neighbourhood of Prague, that he robbed his subjects of their goods and reduced them to penury through his exactions. He took the last cow from a poor widow with five children, but as a judgment, all his own cattle died. He then broke into fearful oaths, and God transformed him into a dog: his human head, however, remained.

A duke of Prussia, according to Majolus, had a countryman brought for sentence before him, because he had devoured his neighbour’s cattle. The fellow was an ill-favoured, deformed man, with great wounds in his face, which he had received from dogs’ bites whilst he had been in his wolf’s form. It was believed that he changed shape twice in the year, at Christmas and at Midsummer. He was said to exhibit much uneasiness and discomfort when the wolf-hair began to break out and his bodily shape to change.

He was kept long in prison and closely watched, lest he should become a were-wolf during his confinement and attempt to escape, but nothing remarkable took place. If this is the same individual as that mentioned by Olaus Magnus, as there seems to be a probability, the poor fellow was burned alive.

John of Nüremberg relates the following curious story. note 1 A priest was once travelling in a strange country, and lost his way in a forest. Seeing a fire, he made towards it, and beheld a wolf seated over it.

The wolf addressed him in human-voice, and bade him not fear, as “he was of the Ossyrian race, of which a man and a woman were doomed to spend a certain number of years in wolf’s form. Only after seven years might they return home and resume their former shapes, if they were still alive.”

He begged the priest to visit and console his sick wife, and to give her the last sacraments. This the priest consented to do, after some hesitation, and only when convinced of the beasts being human beings, by observing that the wolf used his front paws as hands, and when he saw the she-wolf peel off her wolf-skin from her head to her navel, exhibiting the features of an aged woman.

There is an interesting paper by Rhanæus, on the Courland were-wolves, in the Breslauer Sammlung. note 2 The author says,

“There are too many examples derived not merely from hearsay, but received on indisputable evidence, for us to dispute the fact, that Satan–if we do not deny that such a being exists, and that he has his work in the children of darkness–holds the Lycanthropists in his net in three ways”

“1. They execute as wolves certain acts, such as seizing a sheep, or destroying cattle, &c., not changed into wolves, which no scientific man in Courland believes, but in their human frames, and with their human limbs, yet in such a state of phantasy and hallucination, that they believe themselves transformed into wolves, and are regarded as such by others suffering under similar hallucination, and in this manner run these people in packs as wolves, though not true wolves.

“2. They imagine, in deep sleep or dream, that they injure the cattle, and this without leaving their conch; but it is their master who does, in their stead, what their fancy points out, or suggests to him.

“3. The evil one drives natural wolves to do some act, and then pictures it so well to the sleeper, immovable in his place, both in dreams and at awaking, that he believes the act to have been committed by himself.”

Rhanæus, under these heads, relates three stories, which he believes be has on good authority. The first is of a gentleman starting on a journey, who came upon a wolf engaged in the act of seizing a sheep in his own flock; he fired at it, and wounded it, so that it fled howling to the thicket.

When the gentleman returned from his expedition he found the whole neighbourhood impressed with the belief that he had, on a given day and hour, shot at one of his tenants, a publican, Mickel.

On inquiry, the man’s Wife, called Lebba, related the following circumstances, which were fully corroborated by numerous witnesses:–When her husband had sown his rye he had consulted with his wife how he was to get some meat, so as to have a good feast.

The woman urged him on no account to steal from his landlord’s flock, because it was guarded by fierce dogs. He, however, rejected her advice, and Mickel fell upon his landlord’s sheep, but he had suffered and had come limping home, and in his rage at the ill success of his attempt, had fallen upon his own horse and had bitten its throat completely through. This took place in the year 1684.

In 1684, a man was about to fire upon a pack of wolves, when he heard from among the troop a voice exclaiming–“Gossip! Gossip! don’t fire. No good will come of it.”

The third story is as follows:

A lycanthropist was brought before a judge and accused of witchcraft, but as nothing could be proved against him, the judge ordered one of his peasants to visit the man in his prison, and to worm the truth out of him, and to persuade the prisoner to assist him in revenging himself upon another peasant who had injured him; and this was to be effected by destroying one of the man’s cows; but the peasant was to urge the prisoner to do it secretly, and, if possible, in the disguise of a wolf.

The fellow undertook the task, but he had great difficulty in persuading the prisoner to fall in with his wishes: eventually, however, he succeeded. Next morning the cow was found in its stall frightfully mangled, but the prisoner had not left his cell: for the watch, who had been placed to observe him, declared that he had spent the night in profound sleep, and that he had only at one time made a slight motion with his head and hands and feet.

Wierius and Forestus quote Gulielmus Brabantinus as an authority for the fact, that a man of high position had been so possessed by the evil one, that often during the year he fell into a condition in which he believed himself to be turned into a wolf, and at that time he roved in the woods and tried to seize and devour little children, but that at last, by God’s mercy, he recovered his senses. 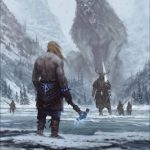