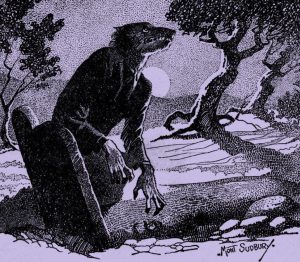 A varcolac in Romanian folklore may refer to several different figures. Some legends say it is a ghost or vampire (Strigoi) while others say it is a werewolf (in some versions, a werewolf that emerges from the corpses of babies).

It can occasionally mean “goblin”. Like the Norse Fenris, the varcolac can swallow the moon and the sun and is thus responsible for eclipses.

These myths probably have a common base in Proto-Indo-European society, where the class of young, unwed warriors were apparently associated with wolves.

The pricolici is another form of varcolac, also resembling a werewolf.

A Pricolici (same form in plural) is a more definite werewolf in Romanian mythology, whereas the vârcolac can sometimes symbolises a goblin.  Pricolici, like strigoi, are undead souls that have risen from the grave to harm living people. While a strigoi possesses anthropomorphic qualities similar to the ones it had before death, a pricolici always resembles a wolf or large dog.

Even as recently as modern times, many people living in rural areas of Romania have claimed to have been viciously attacked by abnormally large and fierce wolves. Apparently, these wolves attack silently, unexpectedly and only solitary targets. Victims of such attacks often claim that their aggressor wasn’t an ordinary wolf, but a pricolici who has come back to life to continue wreaking havoc. 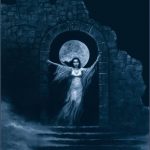