In many films, the plot is centered around a ghost seeking revenge that may be depicted as corporeal rather than ethereal. Some of these revenants look like zombies, depicted with outrageous decayed bodies (13 Ghosts – 2001) but they are not.

The living dead are first and foremost corpses that continue to move around, manipulated by an outside will or self-driven. They are neither manifestations of ectoplasmic fury; nor undead spirits.

Ghosts are said to be kept in their undead state by willpower, either from a keen desire to remain with the living or from a wish to see something completed that they could not do during their lifetime.

Revenants are a corporeal analog for ghosts in this manner, their independence setting them apart from the typically mindless skeleton or zombie.

Even if the mummy can be considered as an animated corpse, the tradition that has developed from Karl Freund’s The Mummy (1932) through the Hammer films of the fifties and sixties gives the mummy a conscious mind and the ability to regenerate its body.

Another common trait between both monsters is the mummy’s power to rise the deads. Interestingly Anne Rice’s novel The Mummy, Or Ramses the Damned combines the mummy and the zombie tradition. Dawn of the Mummy (1981) combines the classic Mummy plot (a mummy, whose tomb is violated, takes revenge on those responsible) with the zombie tradition. Pharaoh Safiraman rises from his tomb, along with the corpses of his retinue, who emerge zombie-like from the sands and proceed to stumble about killing archaeologists, a film crew involved in filming a fashion layout, and the locals. The Mummy rarely participates in the bloodletting, decapitation and flesheating, but simply orchestrates the slaughter.

Occasionally “post-Romero” zombies are referred to as “ghouls”, a name suggested by their cannibalistic tendencies. This is a common mistake as Ghouls are monsters or evil spirits that haunt cemeteries, robbing graves as they prey on the flesh of the deads. Ghouls are neither dead bodies, nor deprived of consciousness.

A lich is a type of undead creature that is the result of a transformation, as a powerful magician or king striving for eternal life uses spells or rituals to bind his intellect to his animated corpse and thereby achieve a perverse form of immortality. A lich should not be confused with a zombie. While both are reanimated corpses, the difference lies in their intellect. Whereas a zombie is incapable of distinguishing friend from foe (only living from undead), a lich is usually as intelligent as a regular human.

There are a number of movies in which characters indulge in zombie-like behavior but are not really zombies as such. Most generally these are possessed or sick; their rationality and usually their wills have been suppressed, and, since they are inevitably going to die, they can be considered as dead. They are zombie-like on a metaphorical level, if not on a literal one.

Another close cousin of the zombie is the cannibal; a subgenre popularized by Italian directors in particular. Cannibal Apocalypse (1982) is very close to the zombie film. But if zombies are usually cannibal, all cannibals are not zombies. One would first object that zombies can not be called cannibals because they do not eat each other, only living humans.

The term cannibalism comes from Canibales, the name given by the Spanish to a reputedly man-eating tribe of Carib Indians who lived in the West Indies when Christopher Columbus arrived. The practice of cannibalism has been reported throughout history in many parts of the world.

Some evidence points to its practice as early as Neolithic times. Herodutus and other ancient writers described cannibalistic peoples. In medieval times the Italian traveler Marco Polo reported that tribes from Tibet to Sumatra practiced cannibalism. It was practiced among many North American Indians, especially the tribes of the western coast of the Gulf of Mexico. Until recently cannibalism was believed to still exist in central and western Africa, Australia, New Zealand, Melanesia, Sumatra, New Guinea, Polynesia, and remote parts of South America.

Several rationales have been proposed for the practice of cannibalism. In some cultures, it was believed that the person who ate the dead body of another would acquire the desired qualities of the person eaten, something like gaining courage from eating a brave enemy. In a few instances cannibalism may have been dictated by no other motive than revenge since it was believed that an enemy’s spirit would be utterly destroyed if the body were eaten, thus leaving nothing in which the ghost could live. Cannibalism was sometimes part of a religious practice.

The Binderwurs of central India ate their sick and aged in the belief that the act was pleasing to their goddess Kali. In Mexico thousands of human victims were sacrificed annually by the Aztecs to their deities. After the ceremony of sacrifice, the priests and the populace ate the bodies of the victims, believing that this would bring them closer to their gods.

A Frankenstein monster-like or other artificially created monsters

Albeit made up of dead bodies, such a monster is not a true zombie: he is a new creation and has no personal past, he is usually not interested in flesh (though there is some overlap at times). However, Frankenstein by Mary Shelley, while not a zombie novel proper, prefigures many 20th century ideas about zombies in that the resurrection of the dead is portrayed as a scientific process rather than a mystical one, and that the resurrected dead are degraded and more violent than their living selves. 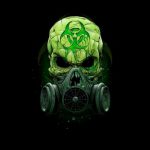