Wrong chemicals like thalidomide brings phocolemy (baby born with hands and foot directly attached to the body). In 6 years (1956-1962), it made more than 8000 victims in Germany, the United States and Latine America. 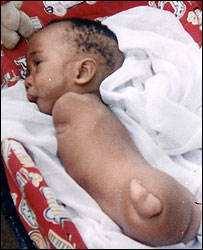 The excess of lead, mercury or dioxin in the alimentation can also triggers disformations in the body of the offsprings. In 1996, the chemical group Chisso had to indemnify the fishermen of the bay of Mininamata in Japan after a long trial. The reject of the nearby plant had intoxicated during twenty years the whole alimentary chain with mercury. Numerous babies were born with mental disorders and/or disformations.

Another suspect chemical product is Benlate. Before its production ceased in 2001, Benlate had long been one of DuPont’s most successful fungicides and was registered worldwide for many crops.

Dozens of families in Britain and America, whose children were born with microphthalmia (small eyes) and anopthalmia (no eyes), are suing the American-based chemical giant. They blame exposure during pregnancy to the chemicals benomyl and carbendazim, which are found in Benlate, a common garden spray.

Isotretinoin (13-cis-retinoic-acid; brand name Roaccutane), which is often used to treat severe acne, is such a strong teratogen that just a single dose taken by a pregnant woman may result in serious birth defects.

It is now generally accepted that the taken of teratogenic products during pregnancy result in adverse effects to certain recipients or to the developing fetus of a pregnant recipient.

The Antiretroviral Pregnancy Registry is intended to provide an early signal of any major teratogenic effect associated with a prenatal exposure to the products monitored through the Registry. The Registry is a voluntary prospective, exposure-registration, observational study designed to collect and evaluate data on the outcomes of pregnancy exposures to antiretroviral products. It can be found at http://www.apregistry.com. 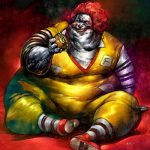 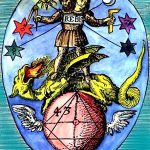 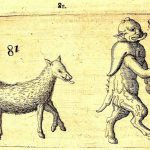 The Six Principles of Teratology