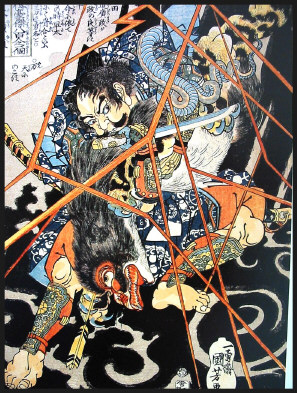 Once upon a time in Japan, a certain emperor became seriously ill. He was unable to sleep at night because of a terrible noise. As soon as the sun set, a dark, black cloud came in from the East, and it settled on the roof of the palace. It was discovered that this was no cloud, but a monster with huge claws.

The only knight brave enough to face this monster was named Yorimasa. He donned his armor, over which he wore a hunting-dress, and a ceremonial cap instead of his usual helmet. He took up his best bow and steel-tipped arrows to fight the creature.

Yorimasa killed the dragon, which was the size of a horse, with an ape’s head, a tiger’s body and claws, a serpent’s tail, a bird’s wings, and a dragon’s scales.

From the very moment the creature died, the emperor’s health rapidly improved. The emperor kept the scales of the dragon in his treasure house, and gave Yorimasa a sword called shishi-o  "the King of Lions