The early 1980s was notable for the introduction of zombies into Chinese and other Asian films, often martial arts/horror crossover films, that featured zombies as thralls animated by magic for purposes of battle. Though the idea never had large enough appeal to become a sub-genre, zombies are still used as martial-arts villains in some films today.

1981’s Hell of the Living Dead was the first film to reference a mutagenic gas as a source of zombie contagion, later echoed by Trioxin in Dan O’Bannon’s 1985 film, Return of the Living Dead. RotLD took a more comedic approach than Romero’s films; Return was the first film to feature zombies which hungered specifically for brains instead of all human flesh (this included the vocalization of “Brains!” as a part of zombie vocabulary), and is the source of the now-familiar cliché of brain-devouring zombies seen elsewhere. Though Russo had a hand in the creation of the original Night of the Living Dead, Return of the Living Dead isn’t considered to be linked to the official “of the dead” series. This is mainly due to the numerous discrepancies between the zombies in both men’s films. While the zombies in Romero’s films can be “killed” in a sense by destroying their brain, Russo’s zombies are effectively immortal, being shown to survive being decapitated and even burned to a crisp.

In 1985’s Re-Animator, loosely based on the Lovecraft story, zombies are corpses reanimated by a mad scientist.

The 1988 Wes Craven film The Serpent and the Rainbow, based on the non-fiction book by Wade Davis, attempted to re-connect the zombie genre with the Haitian vodou (“voodoo”) roots that inspired it.

In Evil Dead, the first movie of director Sam Raimi, The zombies are the result of possession by evil spirits, so their faces quickly developed a white crust over them. Pure white eyes with black circles around them are also typical. These demonic heartbreakers could carry on conversations and attack with focus.

After the mid-1980s, the sub-genre was for a time mostly relegated to the underground. 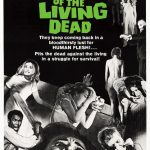