Avenging zombies are featured prominently in the early 1950s EC Comics such as Tales from the Crypt, which George A. Romero would later claim as an influence. The comics, including Tales, Vault of Horror and Weird Science, featured avenging undead in the Gothic tradition quite regularly, including adaptations of Lovecraft’s stories which included In the Vault, Cool Air and Herbert West’s Re-animator.

The Deadworld comic series by Stuart Kerr and Ralph Griffith, began in 1987.

Robert Kirkman, an admirer of Romero, has contributed to the recent popularity of the genre in comics, first by launching his self-published comic book The Walking Dead, beginning in 2003, chronicling the story of survivors in a world overrun by zombies, then by writing Marvel Zombies in 2006 and its sequels: Marvel Zombies: Dead Days, Marvel Zombies vs. The Army of Darkness, Marvel Zombies 2, Marvel Zombies 3.

The Japanese manga series Highschool of the Dead, beginning in 2006, features a group of Japanese high school students caught in the middle of a zombie apocalypse 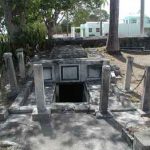