The bag of gear that is required to survive a few days in hostile conditions is often referred to as a Bug Out Bag (BOB) or Get Out Of Dodge (G.O.O.D.) kit by survivalists.

It holds the basic necessities and useful items and weighs anywhere up to as much as the owner can carry. Usually, it is considered that in emergency situations, it will take at least three days (72 hours) for outside the community help to arrive. Therefore, there should be three days worth of food, water, and personal items for each member of the group.

Survival kit also often includes: water purifiers, shelter, fire starters, clothing, food, medical supplies, navigation and signalling gear. The man-portable kit can be used when you don’t have to leave. It can be thrown into a vehicle when the situation allows you to drive away from the area. It also provides you with a kit that can be carried out of an affected area if the damage is too great.

The suggested contents of a bug-out bag vary, but most of the following are usually included:

If the infection is airborne, you need something capable of forming an airtight seal protection of your facial mucous membranes, (eyes, ears, and nose). NBC (nuclear, biological and chemical) full-face respirators are the best but consider also gas masks or fireman’s masks.

Clothing: Anything that provides a suitable barrier to bites, scratches, and other ways infection could be transmitted. Military or tactical clothing is probably best due to the fact that it is by nature designed to resist failure from rugged use in battle conditions.

Gloves should also be worn, as your hands will most often be the tools you use for your survival. It may also be a good idea to wear latex gloves under any other gloves. You may have to carry a wounded friend, move carcasses for burning, or other chores that would require your hands to be exposed to possible infection. Microscopic cracks in the skin on your hands are very common and are viable avenues of infection.

Essential components of zombie survival include food and water.

Humans can not go more than three days without water in optimal conditions, and a much shorter time stranded and stressed under siege from a zombie outbreak.

Avoid drinking water from streams, lakes or any other bodies of water. If a zombie dies and its blood makes its way to that body of water, consider that entire water source contaminated.

Another level in some preparedness plans are Vehicle Kits. In some cases, supplies and equipment may be loaded into vehicle such as a van or truck with bicycle racks and an extra “reserve” gas tank. Some survivalists also carry a small (e.g., 250 cc) off-road-capable motorcycle in the van or truck.

If you have enough room in your shelter or vehicle, prepare hundreds of pounds of non-perishable food: wheat, rice, and beans, cans and enough honey, powdered milk, canned goods, bottled fruit, vitamins, glucose tablets, bullion, tea bags, dehydrated fruits and vegetables, salt, pepper, spices, and oil for several months. A fishing kit and hunting equipment is a must.

The water supplies may include bottled water, filtering kit, bottles, collapsible water containers, and potassium permanganate or chlorine bleach for water purification. 4 litres (1 gallon) of water per person is required per day, for washing, drinking and cooking.

Food preparation and washing equipment may include items such as a grain grinder, a bread mixer, a strainer, a manual can opener, a steam canner with canning jars and O-rings, cutlery, knives, an electric 12-volt cooler icebox, kerosene lamps and heaters, kerosene or propane stoves, extra fuel, a clothes wringer, a foot-operated treadle sewing machine, and an electric hot plate.

This category includes lighting and fire starting equipment (i.e. matches, ferro rod, lighter, etc.) rechargeable flashlights, as well as candles and matches when there will be no more batteries.

The power supplies may include a diesel or gasoline generator with a one month fuel supply, an auto battery and charger, extension cord, flashlights, rechargeable batteries (with recharger), an electric multi meter, and a test light. 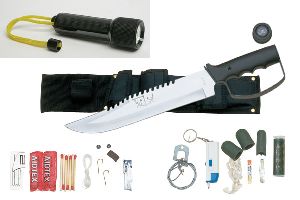 A crowbar and a folding knife will help you face most situations. Tools may also include cutting tools such as saws, axes and hatchets, rope and nylon cord, pulleys, pliers, chisels, a hammer, screwdrivers, glue, nails, nuts, bolts, and screws; mechanical repair tools such as an arc welder, an oxy-acetylene torch, a propane torch with a spark lighter, a solder iron and flux, wrench set, a nut driver, a tap and die set, a socket set, and a fire extinguisher.

A compass and maps, a signalling mirror, a flashlight and a whistle is the minimum to bring.

The communications equipment may include a multi-band receiver/scanner, a citizens band (CB) radio, and portable “walkie-talkies” with rechargeable batteries.

Forget your iPhone, its not gonna work when Z-Day is on.

Medical care is very important for surviving any disaster situations. During the event of a zombie attack or even the process of running from zombies greatly increases the risk of injury.

First aid, just like other preparation factors, is an important subject that requires training and education.

The American Red Cross offers training courses in first and CPR, as well as more information on disaster first aid.

You may include the following items: 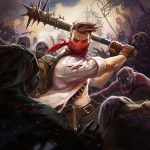 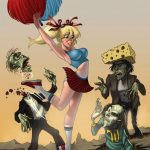 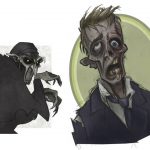