Parasitism is a type of symbiotic relationship between two different species. The parasite benefits and the host is harmed.  Some parasites have the potential to cause behavior modification in their effected hosts. This change in behavior has already been documented in many species, including humans.

Fungus: Certain species of fungi can infect and kill insects.

The Dicrocoelium dendriticum is a parasite which can only complete its life cycle inside the stomach of a grazing mammal. This is unimportant; however, how this bug gets into the stomach is very relevant. This parasite has the capability of invading the brain of ants. Once it has found a host ant, it makes it crawl up to the very tip of a blade of grass and forces it to clamp on. In doing this, the ant has no control over its own body and awaits death as grazing animals eat their way closer to the ant.

Another bug, Euhaplorchis californiensis, is very similar. This parasite infects the brains of fish causing them to jump and wiggle around vigorously near the water’s surface. This makes the fish easier to catch for a bird of prey. Once the bird catches, kills and eats the infected fish, the parasite has achieved its goal.

The disease can affect many types of mammals, including cattle, sheep, elephants, South African white-tailed deer, primates, and humans. Infected animals and people become listless and emaciated, losing hair and becoming weaker until paralysis sets in.

The most notable symptom of sleeping sickness, which gives the disease its name, comes after the parasite has invaded the brain: Infected people are unable to sleep at night and can’t stay awake during the day.

Those who get the disease also experience fevers and muscle aches, followed by mental deterioration, personality changes, and problems with walking and balance if it’s left untreated. There is no vaccine to prevent sleeping sickness, but several drug treatments are available for infected patients.

“Victims find it hard to concentrate. They become irritable, their speech is slurred and they stop eating,” Sanjeev Krishna, a professor of medicine at the University of London, told the BBC, adding, “this is an infection that carries nightmarish qualities, reducing many of its victims to a zombie-like state before they go into a coma and die.”

Finally, there’s the Toxoplasma gondii. This parasite resides in the guts of cats where it produces eggs at an alarming rate. These eggs are excreted in the cat’s bowel movements where they can then be easily consumed by rats and other animals. This bug then forms cysts throughout the body and brain of the infected animal and can eventually result in death. Moreover it is proven to alter the behaviour of rats. It removes their fear of cats to increase the chance the rat will be eaten, allowing the parasite to reproduce in the cat’s intestine.

Toxoplasma gondii doesn’t just infect animal brains; it can also affect the human brain. It is estimated that half of the Earth’s human population is infected. Jaroslav Flegr of Charles University in Prague administered questionnaires to infected humans. He found that women infected with Toxoplasma tended to be more outgoing and friendly than the uninfected whereas infected men tended to be more jealous and suspicious.

For most infected humans; however, the parasite cannot harm them and they show no obvious symptoms. It is only in people with weakened immune systems such as pregnant women or people with AIDS that complications begin to appear.

In popular movies, once a non-infected person comes into contact with a zombie, he can be consumed by the parasite and begin exhibiting zombie-like characteristics within hours. It most be noted that this is very unlikely and the process is more prone to take days. 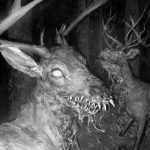