In many ways one of the most remarkable demonologies is that presented in the Avesta (q.v.), the sacred book of the Mazdean religion of Zoroaster. Zoroastrianism is the doctrine or teaching of Zarathustra that is also known as Mazdaism, Bah Din, Parsiism, and Fire-worship. The doctrine was founded by the Persian prophet Zoroaster or Zarathustra about 720-541 BC.

While still a young man he began having conversations with Ahura Mazda (the “Lord of Wisdom”) from whom he received revelations. In this ancient religion, which unlike that of the Assyrians, was not popular from the beginning but still exists in the Parsee community, the war between light and darkness, good and evil is eternal. The mythological system was based on the Persian worship of the ahuras, good deities eternally at war with the evil daevas. It must be noticed that these deities come the Aryan polytheistic paganism which made it later attractive to the Greeks. Plato, Aristotle and other Greek thinkers took great interests in some of the doctrines.

To Plato, the creator of the Universe, Demiurge would be adopted by the Gnostics, and other heretical sects, as the false-god that created the world and all physical matter, and also authored the Scriptures themselves.  The Gnostics believed that the sins of man  keep them under the control of Demiurge, and his army of false-angels, the Archons.

True religious dualism posits the existence of two absolute cosmic principles, wholly independent of one another. Neither can be omnipotent, since they must by definition limit one another. In absolute dualism, there can be no single, ultimate divine principle. The novelty of Zoroaster’s system is that it does away with the morally indefinable conception of the single divine principle in favor of a cosmic struggle between the good Lord, Ahura Mazda (Ormzad) and Ahriman (Anro Mainyu), the cruel Evil Spirit, the Demon of Demons (Daevanam Daeva).

Ahriman is served by many demons whose names have been adopted later by the Jews: Azazel, Lilith, Rahab, Leviathan. Zoroaster preached devotion to the absolute good, and prophesied that, in the fullness of time, evil would be utterly destroyed by the Lord. Although there are marked differences between the demons of the Avesta and the devil in Scripture and Christian theology (for Christian doctrine is free from the dualism of the Mazdean system), the essential struggle between good and evil is still the same in both cases. And the pictures of the holiness and fidelity of Zoroaster when he is assailed by the temptations and persecutions of Anro Mainyus and his demons may well suggest some faint analogy with the great scene of the temptation of Christ in the wilderness.

The important part played by the demons in the Mazdean system may be seen from the title of the Vendidad, which is the largest and most complete part of the Avesta, so much so that when the sacred book is written or printed without the commentaries it is generally known as Vendidad Sade which means something that is “given against the demons” . 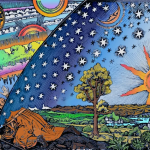