Barnum put his hand on the pinhead children in 1849 after they were purchased in Salvador by an adventurer. In a pamphlet “recording” their lives, the story goes that the two were found in an ancient Aztec temple at Iximaya, and were being worshiped as Gods by the local peoples.

The story, of course, was absolutely false, but it fascinated victorian Americans who were just now learning about the cultures of other lands and were especially intrigued with their southern neighbors. The Aztec children performed dressed in tunics decorated with sun rays and sun faces, and would dance around and speak “the lost Aztec tongue”, or gibberish.

They disappeared around 1890 but had numerous followers. 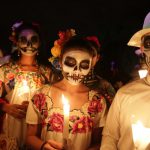